Argentina's current population is more than 40 million inhabitants, almost half of which live in the city and the province of Buenos Aires. Population density calculated on a national basis is 14 inhabitants pér square kilometer.

The official language of the Argentine Republic is Spanish.

There is complete religious freedom in Argentina, although Roman Catholicism prevails. Other religions practiced in the country are Protestant, Jewish, Moslem, Greek Orthodox, Russian Orthodox and others.

U.S and Canadian citizens must present a passport valid for the expected duration of their stay in Argentina. Tourist visa is not required for stays of 90 days or less. However, a reciprocity fee must also be paid online prior to arriving in Argentina (see below for further information).

US, Canadian and Australian citizens need to pay a reciprocity fee before entering Argentina. This fee varies depending on nationality.

Reciprocity fees must be paid online prior to their arrival in Argentina. The fee is payable on the Dirección Nacional de Migraciones website.

A printed receipt must be shown to your airline company upon check-in and submitted to immigration authorities upon arrival. Failure to pay this fee in advance may result in refusal of boarding or entry to Argentina and a possible return to your port of origin. The fee is valid for multiple entries until one month prior to the expiry of your passport. Make sure you keep more than one copy of the receipt for your entries.

The Seasons in the Southern Hemisphere are opposite to those in the Northern. The most favorable season to visit Patagonia and the Southern Andean range is summer – with mild temperatures and longer daylight hours, although in

winter the area is popular among winter sports enthusiasts. Winter is the best time to visit the northern region, as it rarely rains and the subtropical temperature is a bit cooler. Spring and Fall are as wonderful in Buenos Aires as in the rest of the country.

All airlines flying to Argentina arrive mainly at Ezeiza (“Ministro Pistarini”) International Airport (EZE), which is 37 Km away from the City of Buenos Aires.  Mendoza also has a small international airport (MDZ) with flights to Buenos Aires and Santiago Chile.

Remember that in the southern hemisphere seasons are the opposite to those in the northern hemisphere. In general, the summer is the best time to visit Patagonia and the Southern Andes because of the mild temperatures and long days. Wintertime is recommended for travelling to the North and Northwest as rains are less frequent and tropical

temperatures drop a few degrees. Autumn and spring are marvelous in Buenos Aires, Cuyo and the pre-mountain range areas of La Rioja and Catamarca.

GETTING AROUND BY PLANE

Due to the country’s large size, planes are best to travel long distances, and you can then take overland transportation to get to your final destination. Buying Airpass Visit Argentina in your own country, you’ll obtain more economical prices

You may obtain a VAT reimbursement to any purchases of local products made for an amount over $70 (per invoice) in shops operating with the “Global Refund” system, as follows:

Although US Dollars and Euros are generally taken everywhere, foreign currencies can be exchanged in banks and authorized bureaus. American Express, VISA, Diners and Master Card are widely accepted. There may be difficulties in changing traveler's check outside Buenos Aires. 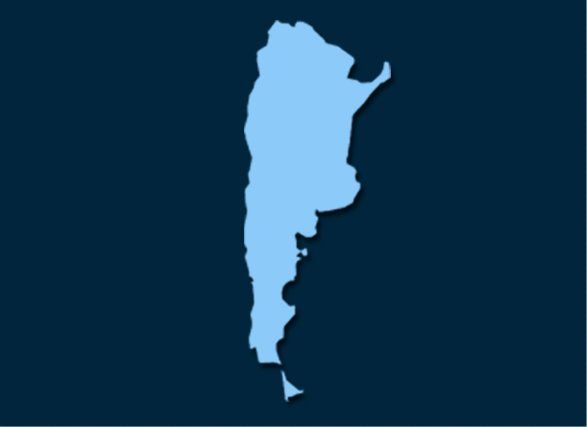 Stores: in the big cities 9:00am to 8:00pm, although in the outskirts and the provinces they generally close at midday. Saturday hours are 9:00am to 1:00pm.

Cafés, cake shops and pizzerias: open most of the time except between 2:00am and 6:00 a.m.

Restaurants: lunch is served from 12:30pm and dinner as from 8:30pm. Fast-food menus are served in many restaurants at all times.

10% of the amount of the check is usually left in cafeterias and restaurants. Doormen, porters, and ushers in cinemas and theatres are also generally tipped.

Pay phones work with cards that may be purchased in kiosks and telephone companies’ offices, or with legal tender coin. There are also stores with pay phones (open 24 hours a day) where you can pay in cash. Calling to Argentina from abroad, dial the country code (54) and then the area code of the place you want to call. For domestic calls, dial 0 before the area code. For international calls, dial 00, the country code and city code.Note that tariffs are reduced from 10:00pm to 8:00am

It comes from the Latin term “argentum”, which means silver. The origin of this name goes back to the first voyages made by the Spanish conquerors to the Río de la Plata. The survivors of the shipwrecked expedition mounted by Juan Díaz de Solís found indigenous people in the region who gave them silver objects as presents. The news about the legendary Sierra del Plata - a mountain rich in silver - reached Spain around 1524. As from this date, the Portuguese named the river of Solís, Río de la Plata (River of Silver). Two years later the Spanish used the same name. The National Constitution adopted in 1853 included the name “República Argentina” (Argentine Republic) among the official names to designate the government and the country’s territory.

Located in South America, and thus, in the southern hemisphere, Argentina has an area of almost 3.8 million square kilometers, 2.8 on the continent – approximately 54% are plains (grasslands and savannahs), 23%, plateaus, and the other 23%, mountains - and the remainder in the Antarctic. It is 3,800 Km. long and is located between latitude 22º and 55º. Its border with Uruguay, Brazil, Paraguay, Bolivia and Chile has a perimeter of 9,376 Km, while the territory bordered by the Atlantic Ocean is 4,725 Km long.

Argentina’s main characteristic is the enormous contrast between the immense eastern plains and the impressive Andes mountain range to the west. This is the frontier with Chile and boasts the highest peak in the Western hemisphere: the 6,959m high Aconcagua.

From Jujuy to Tierra del Fuego, the Andes present marvelous contrasts: the Northwest plateaus, the lake region, the forests and glaciers in the Patagonia.

To the north, Chaco is a forested area linked to rivers Bermejo, Salado and Pilcomayo.

Between the Paraná and Uruguay rivers, the Argentine Mesopotamia (provinces of Entre Ríos, Corrientes and Misiones) is formed by low hills, where pools and marshlands evidence the ancient courses of these great rivers. In some places within the subtropical rain forest, there are fissures which provide such spectacular phenomena as the Iguazú Falls.

The Pampas, in the center of Argentina, is the largest and best-known area of plains.

Agricultural and livestock activities are performed in this area, which includes the province of Buenos Aires, the northeast of La Pampa, the south of Córdoba and south of Santa Fe. To the south, the plains give way to small hills in Tandil and de la Ventana, and to the west, to the Córdoba hills.

Towards the south, from the Andes to the sea, there appear the sterile and stony plateaus of Patagonia, swept by the wind during most of the year. The Atlantic coast, lined with high cliffs, forms massive indentations like the Peninsula Valdés, with its spectacular and unique colonies of sea animals.

The country’s territory offers a wide variety of climates: subtropical in the North, sub-Antarctic in the southern Patagonia, and mild and humid in the Pampas plains. Media temperature from November to March is 23° C, and 12° C from June to September.

*Public holiday or non-working day whose celebration date may vary.

**Public holiday to be celebrated on the third Monday of each pertinent month.

***Public holiday to be celebrated on the second Monday of each pertinent month.

****Public holiday to be celebrated on the fourth Monday of each pertinent month.

Information courtesy of the Argentina Ministry of Tourism.