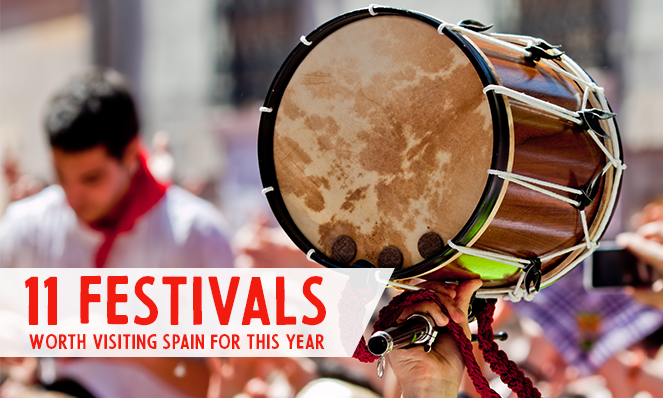 11 Festivals Worth Visiting Spain For This Year

Spain is a country rich in, well, everything. Food, world-renowned as of late in Spain, in endless flavors and varieties, is a sensory experience you don't want to miss. Because of the country's diverse landscapes and growing regions, Spain’s chefs have been able to create some of the most eclectic offerings in the world’s food communities. The centuries-old gazpacho, for instance, a staple of southern-Spanish cuisine, has evolved in unexpected ways according to Food & Wine: “The  new millennium ushered in high-tech versions from creative chefs—spherified, liquid-nitrogenated, deconstructed into foams and gelées… It might well be the soup of the century.” From seafood to tapas to paella, to savory wine and artisan cheeses and centuries-old recipes for sweets, the sheer diversity and quality staggers the mind, and mouth.

Dance, from the traditional Flamenco to the Paso Doble and Bolero; Spain has gifted the world with more ways to celebrate, connect and express than most countries in the world. The weather makes it a favorite any time of year to visit, as the country boasts the most days of sun, statistically, of all the European countries. As far as palaces, churches, and monuments go, Spain is hard to top, which is why Game of Thrones chose to shoot many of its scenes in its iconic relics. Influences of Roman, Gothic, Renaissance, Baroque, Spanish Colonial and Neoclassical styles abound throughout the country. If you want to experience some of the best Moorish and Christian craftsmanship, head to the southern region, as noted in Nancy Nathan’s Washington Post article on the palaces and cathedrals of Andalusia.

For beaches, I would argue Spain outpaces almost everywhere in Europe. It has over 5,000 miles of coastline and the highest number of blue-flag awarded beaches, 669, indicating the cleanest water and in most cases, access for those with disabilities. For UNESCO sites - the recognition of places of importance to cultural and natural heritage, Spain boasts 48 locations, the third-most in the world.

Traditions are equally rich and varied, and Spain’s populations pride themselves on keeping the cultural elements strong and celebrating everything that makes them who they are. Many of these traditions can be seen in the hundreds of festivals Spain hosts every year, celebrating everything from wine-growing prowess to culinary delights to dance, debauchery, religion, and artistry.

Here are our travel teams’ top picks on the festival and food and wine scenes for visiting Spain this year: 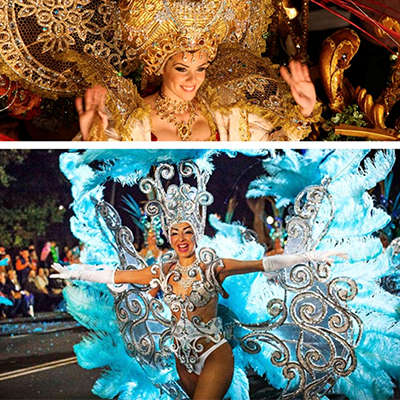 Carnival, Tenerife, Feb. 20-26, 2020
Before the start of the Christian Lent, Tenerife, the largest and most populated of the Canary Islands, hosts the second-largest Carnival celebration in the world. Being the warmest place in Spain, the location is ideal in the winter month for the spectacular (and sometimes tiny) costumes of the performers. Brought to the island after the Spanish conquest in 1492, the celebration became official in the 19th century, and, like most carnivals, it is the last chance for a feast and giving into excess before Lent. 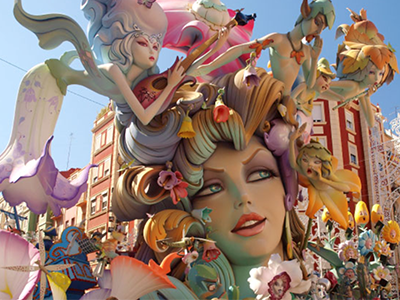 The Fallas Bonfire Festival in Valencia, March 15-19, 2020
Begun in the middle ages in Spain, The Fallas Bonfire began around carpenters’ wooden lamps, which were used to light their workshops on long winter evenings. As spring arrived, the lamps would be burned as a way of celebrating the passing of the winter season. Later, the lamps were decorated with old clothes to give them personality, and this eventually evolved into wooden, cardboard, papier-mache, styrofoam, wax, cork and plaster figures we see today. Every year committees of artisans from each neighborhood gather to design and construct the massive structures in Valencia, which sometimes reach 65 feet in height, and are artisan’s takes on political figures, celebrities and sports figures of the day. More than 700 of these figures are installed around the town, and open-air celebrations, parades, bullfights, competitions, and more events make this one of Spain’s most famous festivals. The event culminates with a giant bonfire of all the figures, fireworks and music, and from afar, it looks like the entire town is on fire. 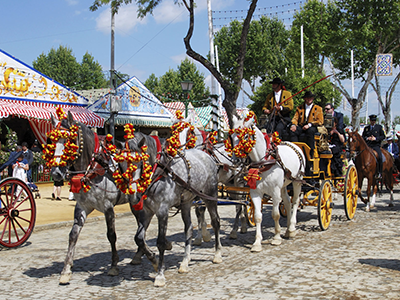 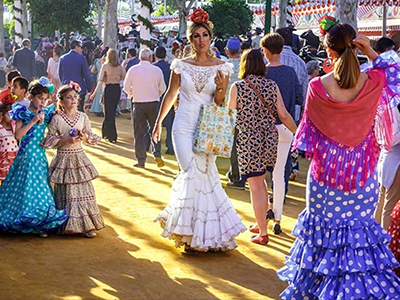 Seville April Fair, April 28 - May 3, 2020
Held in the Andalusian capital of Seville, this fair usually begins two weeks after Semana Sata, or Easter Holy Week. Each day the leading citizens of Seville parade in carriages, showing off the "traje corto" (short jacket, tight trousers, and boots) for men and the "trajes de flamenca" (flamenco-style dress) for women, as they promenade toward the bullring. Rows of casetas (individual decorated marquee tents) are constructed on the fairground, housing Seville’s most prominent families, clubs, friends and associations, and mini-parties are held on the streets, and in each caseta, from around 9 at night to 6 or 7 in the morning. Each caseta is equipped with a bar, kitchen and sound system or live entertainment playing Sevillanas, a style of song and dance that originated in Castile. In addition to the fairground activities, there is an amusement park, live music, and food throughout the area, bullfights, and fireworks to culminate the festivities.

La Fira del Vi, May 1-3, 2020
Held in the village of Falset, in Catalonia, this wine festival showcases the Montsant and Priorat wine regions, acclaimed in wine circles for Grenache and Carigan grape varieties, among others. Winner of prestigious international awards, the Priorat wines are extremely popular, with characteristics that make the wine unique and exclusive, and its international acclaim brings an equally international audience to this annual event. The area even bears the Qualified Designation of Origin (“DOQ”) which indicates protective measures are in place to ensure the continued quality of the wine produced. The festival includes tastings, food, and music, as well as talks from the producers. http://www.firadelvi.org/en/fair 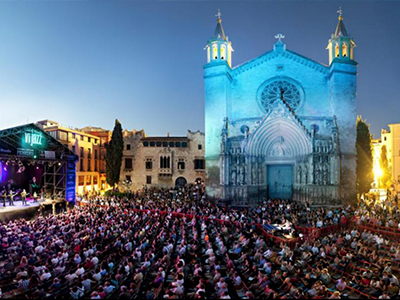 Wine and Jazz Festival, July 3-5, 2020 Vila Franca del Penedes
The ViJazz wine and jazz festival takes place on the outskirts of Barcelona in the first weekend of July and showcases the wines and cavas from the Penedès region. With over 30 producers from DO Penedès and DO Cava offering around 300 wines paired with gourmet products such as ham, cheese, foie, anchovies, and sweets, it’s a favorite among wine lovers and foodies alike. The region’s rosés, white, black, classic and sweet Dolmen are available for tastings, and pairings are led by top winemakers and sommeliers. But what makes this a really special festival is the organizer’s ability to attract some of the biggest names in Jazz. This year’s festival included Jazz greats Archie Sheep, Madeleine Peyroux, Monty Alexander, Arturo O'Farrill, Antonio Lizana, Damaris Gelabert, Elia Bastida & the Joan Chamorro Quartet. 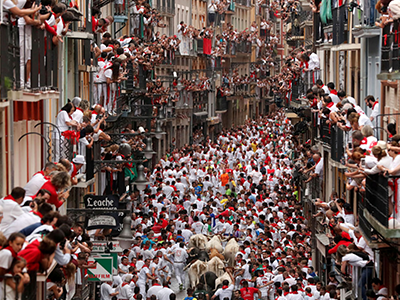 San Fermin Running of the Bulls, July 7-14, 2020
Held since 1591, the annual 9-day festival attracts thousands of visitors every year to Pamplona. While controversial, it remains a tradition to the Spanish and a must-see on most Spain event lists. Kicked off at 8:00 am every day with a crowd of runners trying to outpace six bulls, the festival highlights the bravado of the men who try not to show their fear as they careen down the historic quarter of Pamplona. The festival also includes traditional Basque sports and dancers, free concerts held nightly in the Plaza del Castillo and other locations around the city, and fireworks. Each evening bullfights are held in the Plaza de Toros de Pamplona, and more than 300 hundred bars and restaurants host gastronomy and entertainment events. In addition, parades of Cabezudos, Kilikis, Giants, and Zaldikos, (huge papier-mâché figures), accompanied by pipe and txistu players, proceed through the streets of Pamplona each morning.

Fiesta del Albarino Wine Festival July 29 - August 2, 2020
Held in the seaside town of Cambados, the capital of the Albarino wine region, this 5-day celebration toasts the internationally-acclaimed Albarino wine and its craftspeople. Tastings are held throughout the area, and formal competitions, exhibitions, and awards ceremonies commemorate the best of the best that year. Workshops, courses, music and fireworks displays also part of the fun, and food vendors abound, showing off local produce and the region’s gastronomy. http://xn--fiestadelalbario-lub.com/ 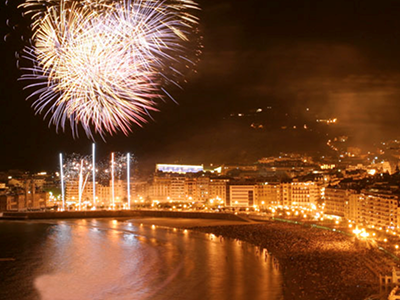 Great Week San Sebastian August 10 - 16, 2020
Held during the week of the Feast of the Assumption on August 15 along the coast of San Sebastian in northern Spain, Great Week (or Semana Grande) is a full week-long citywide street party. Best known for its International Fireworks Competition, visitors will get to see nightly displays of some of the most awe-inspiring fireworks in the world as competitors take over the skies to show off their artwork. The week is also filled with music performances from some of the biggest artists on the Spanish and Latin American charts, endless street parties, and gastronomic events, as well as sports activities like horse racing, beach volleyball, and Basque rural sports. For kids, the gigantes y cabezudos (giants and fat-heads) parade is a treat and takes place daily during the festival. Another fun event is the Abordaje Pirata (Pirate Boarding), where thousands of participants dressed up as pirates “sail” from the harbor to the beach in their homemade rafts. 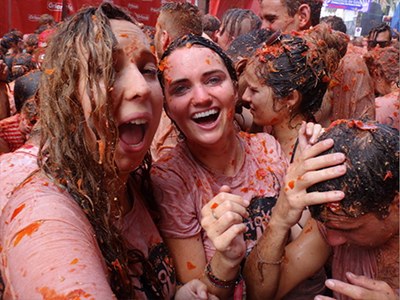 La Tomatina Festival, August 27, 2020
La Tomatina, which takes place in Buñol on the last Wednesday in August, began as a food fight, as the story goes. Today it’s a major tourist attraction, with over 20,000 participants and 30,000 lbs of tomatoes being carted in from around the area to take part in the “World’s Largest Food Fight”..or at least the world’s largest tomato fight. Festival-goers don goggles (and sometimes snorkels) and clothes they likely plan to toss as they throw themselves into the festivities. Be prepared for chaos and fulfilling your food fight fantasies. 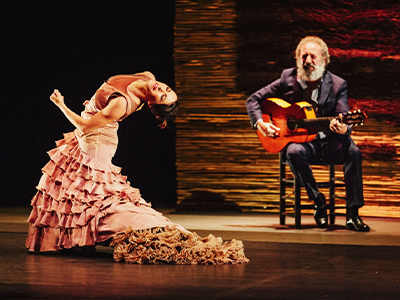 Bienal de Flamenco, Sept. 4 - October 4, 2020
Held every two years since 1980, this celebration draws some of the best flamenco artists and performers around the world. The festival mixes the culture of flamenco with tourism in the region: some of the Malaga province's most beautiful towns host performances, including Antequera, Nerja, Fuengirola, and Ronda. Aside from the main performances, there are art events, dance competitions, dance classes, conferences, talks, and seminars.

Cava & Gastronomy, early October 2020
Cavtast, held in Spain’s Cava capital of Sant Sadurní d'Anoia, is the celebration of all things Cava, a sparkling Catalan wine that is made in a similar way as Champagne. Held over 3 days, the event is a must-do for foodies and wine lovers alike. Attendees can enjoy over 42,300 cava tastings and more than 22,000 food tastings, including charcuterie, patisserie, chocolate, and traditional Catalan cuisine. If that’s not enough, dive into any of the exhibitions, workshops and live music.

For questions, or booking your personalized tour to Spain this year, contact us at Travelous today.