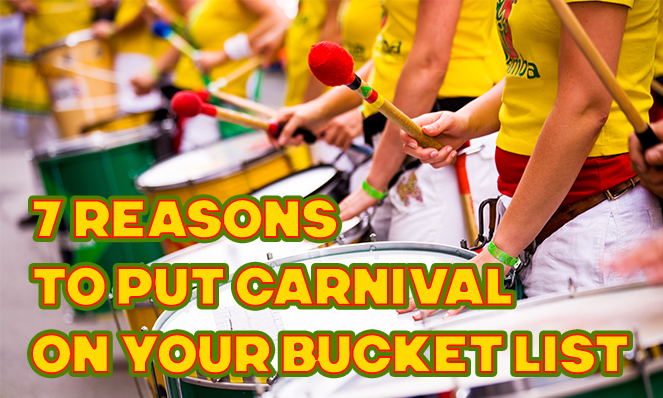 When you think Carnival, you might picture Rio - feathery headdresses, colorful costumes and non-stop parties. But the reaches of Carnival go much further than Brazil. And even though Rio's Carnival has international acclaim, there are tons of bucket list-worthy Carnivals in so many destinations.

In some cities, Carnival is a one-day event and in others, it's a week-long celebration. I'm lucky enough to live in a country where Carnival is a month-long ordeal. People get-together every Sunday and party it up, so much so that I completely burned the soles of my sandals last week. I had a fun walk to the car parked miles away – I could feel every pebble. But it was well worth it! Here, Carnival is a never-ending parade while in other places, it's an all-day street party that might resemble a concert. So, the question is, where do you want to go, what do you want to see and how long are you ready to party for?

Do you want to experience a booty-shaking Caribbean carnival in Cartagena, Colombia or in Limon, Costa Rica or would you prefer to delve into centuries-old African culture and discover candombe at the Montevideo Carnival in Uruguay? Can you imagine yourself reliving the legacy of the indigenous people in Guarando, Quito or a dancing away while a giant piñata tree is being chopped down in Cajamarca, Peru?

The reality is that no matter which Carnival you attend, how long it lasts or the setting, you're going to have an insane amount of fun. After all, according to tradition, Carnival is about indulging your senses before the 40-day period of fasting known to Christians as Lent. Indulging your senses are an understatement, overwhelming your senses may be more appropriate; think stunning costumes, endless food, delicious smells, pounding music, non-stop dancing, lots of drinking of course and much more.

The music is unreal

Whether it's Samba, Soca, Champta, Palo de Mayo, Salsa, etc, the bands preforming at Carnival are serious...and competitive. It's their greatest chance to showcase their talent over the course of the year, so you better believe they're going to bring it. Here in Guadeloupe, the bands have been rehearsing for Carnival every single night for the last three months. Amazing for tourists who get to enjoy the musical perfection they've attained but a little less amazing for those living near the practice halls. That being said, they're crushing it and showing off the best in local music, who wouldn't want to hear that?

The costumes are a work of art

Year after year, dancers come up with new costumes, often handmade. And they're usually more extravagant than the year before. When I attended my first Carnival, my mouth dropped open as I saw the first group of dancers (I think it stayed open the entire time). The iridescent, flawless face and body makeup, the sequined and beaded patterns, the elaborate wings and headdresses that were adorned in feathers, beads and color. Beyond words. It's really a chance to see creativity at its best. The dancers work on their outfits year-round and it absolutely shows.

Locals are at their friendliest

Locals are proud of their music, dances, cultures and traditions, which they're putting on display. So they're generally thrilled to see people from around the world coming to enjoy it with them. I have a friend who attended Carnival in Rio and next thing he knew, a fellow street partier ( local ) invited him for feijoada at his grandmother's the following Sunday. He accepted the invitation and went. He found the whole family gathered together - young and old alike - and they gave him so much love. That's pretty special. It's also not uncommon to be offered free food or drink by the locals in countries like Ecuador and Colombia. They want to make sure you don't leave their country without having tried anything. Also in Ecuador or Peru, you might find yourself getting special attention when it comes to their indigenous tradition of dumping flour, perfumed water and soap suds on Carnival attendees.

The partying goes on and on and on

Carnival is one big party. And if you're like me and can't stay awake past midnight, don't fret. Parties can start as early as 7 am in the Caribbean area particularly, so you can party hard while you're at your best and then curl up to sleep at a decent hour of the night. Or, you can continue on with the festivities until the next day. And the beautiful thing is that people of all ages are celebrating life together - a rare but powerful moment of connectedness. Side note: apparently Montevideo's Carnival is the longest carnival in the world (the partying starts in November!! Instead of January or February)

Since people are out in the streets for hours, someone has to make sure they're fed. Luckily, dedicated street vendors are working in shifts, selling everything from snacks to downright delicacies. It's a chance to try the local cuisine all in one shot. From fritadas, empanadas and grilled Guinea pig in Ecuador to arepas de queso and ceviche in Colombia. And from rondon to pati in Costa Rica to carurú and pastel de queijo in Brazil, you get the best of the best all in one place. Then of course, the booze is flowing, and the local beers and cocktails are available all around. Can’t get better than this.

Tradition and culture on display

Rich culture and heritage are on display for you to marvel at without needing to book a show or visit a museum. This is a real, pulsating experience where sometimes even centuries old traditions are laid out on the street stage in front of you. Even though Carnival started off as a Catholic tradition, local people found a way of merging their ancestral practices into the mix. Just a small example, in Ecuador & Peru, the Inca’s Pawkar Raymi celebration, which is also called the “blossoming” involves the throwing water and flowers on Carnival attendees. This colorful celebration of it is a sight to see and the ritual is also said to invoke new, creative energy into your life.

Excuse to explore a new country

And finally, when you go to Carnival, you can tail end your trip with a relaxing coastal vacation, a mountain retreat or even a jungle exploration tour because in all of the Carnival destinations, January and February equals summer! It’s the perfect time of the year to party and discover a new Travelous destination.