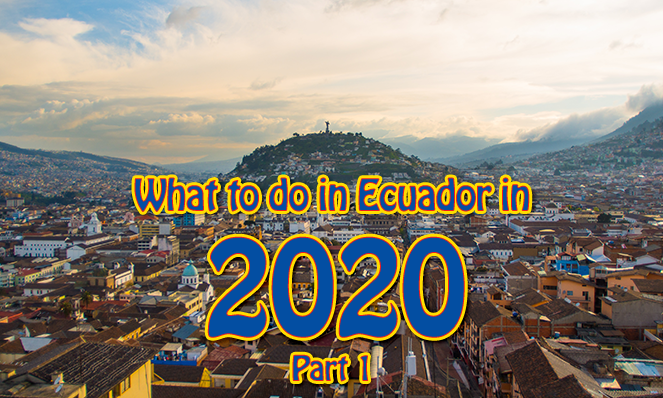 Besides being a nature lover’s haven and the perfect destination for leisurely strolls down cobblestone streets to catch glimpses of incredible colonial architecture and stunning landscapes, Ecuador is truly a hub for cultural events.

Music and festivals are a huge part of Ecuadorian day-to-day life. Throughout the year, locals find many reasons to gather, dance, sing, parade and dress up. Meanwhile, visual art has played an important role throughout the history of the nation and is often used to depict injustices, hardship, and life in the pueblo (countryside). Tradition is cherished in Ecuador, meaning that almost every weekend, there is a reason to celebrate.

Here are some of the most noteworthy events of the year; memorable moments that will no doubt leave any wanderer awe-stricken.

Throughout the month of February, it’s not just Brazilians who are partying it up. Ecuador in an amazing destination for Carnival as the celebrations are elaborate displays of color, dance and all sorts of things flying from the sky (flour, eggs, water, soap suds, etc). Ecuadorian Carnaval is alive with tradition – including mestizo, Afro-Ecuadorian and indigenous heritage. The most famous places for Carnaval are Ambato, Guaranda, Colta, Guamote, Totoras and Salasaca.

Discovery of the Amazonian River

Be amazed by the spectacle of Amazonian dances put on my various indigenous communities. This festival dates back more than 500 years and as the name suggests, commemorates the day the Amazon River was “discovered.” It also presents a great opportunity to discover artisanal goods from different regions of Ecuador.

As fruit trees flower and bloom, Andean communities begin their beautiful Pawkar Raymi rituals to honor Pacha Mama (Mama Earth). From a barefoot pilgrimage to the river to flowing dances and purification ceremonies in water, this 11-day festival will blow you away. It's vibrant and intricate, every small detail is meant to pay respects to Mother Earth.

The last 8 days of February leading into March, in villages and cities all over Ecuador. Otavalo is famous for the festival.

During the months of March to May, the Fiesta de la Chonta is in full swing in Amazonian communities. Through poetry, dance and art, Shuar people give thanks to Mother Nature for the “chonta” fruit, which grows in abundance during this time.

March to May: Las Amazonias

This Afro-Ecuadorian music, called Chota, originated in the picturesque Valle del Chota region. The festival is a non-stop dance party that is jam-packed with performances and dance competitions.

Dance groups, bands, serenading choirs, processions, and even theatrical performance,s including the lighting of a eucalyptus tree (chamiza) take place during the day; the purpose is to honor Saint Joseph, the country’s patron saint.

All over the Quito, chapels, churches, and even the great cathedral open their doors to famous singers, orchestras and choirs from around the country who wish shower the audience with divinely inspired music. It’s a piece of paradise,

This is a huge deal for locals and the best time to witness Ecuador’s rich cultural traditions. Holy Week coming up to Easter is spent in processions (you’ll see thousands of purple-hooded “sinners” being dragged around in chains) that are both solemn and vivacious. Families gather around to cook complex dishes like fanesca (salt codfish soup) and the streets are taken over by choirs and dancers performing folkloric dances and songs.

This agricultural fair brings together farmers and artisans who come to showcase their most prized goods. Enjoy parades, poetry recitations, and traditional dances as well as delicious home-grown food.

Also, a festival that is centered on giving thanks to Mother Earth for the cherimoya fruit, this feast is known for the incredible food, art exhibition, and folkloric traditions that include dance and singing competitions.

The Corpus Christi Festival is a yearly festival that has been bringing thousands of people to the city of Cuenca for almost 500 years. During the day, open-air markets, dance performances, concerts, and parades are in abundance. In the evening, marvel at fireworks and flying lanterns setting the city ablaze.

Mozart would be delighted to see his opera come to life in Quito, as Andean dances and traditional costumes take over the stage. This classical opera production with a twist runs for a week and is receiving international acclaim because it truly is magical.

Throughout the month of June, the French Alliance of Ecuador puts on the Cuenca Music Festival as a result of a partnership between the two countries to boost arts events around the city and country. Musicians come from around the globe to perform various styles of music, from Salsa to Rock and from Pasacalle to Yarabi.

This majestic Incan festival celebrates the sun and its goodness to Nature. To show their thanksgiving, locals take part in a day-Incan ritual, energetic parades, bonfires, barbecues, and lengthy dances. A pilgrimage to the Pechuge Waterfalls to purify oneself kick-starts the occasion.

Come back next week for the latter half of 2020. We’ll be talking about theatre productions and huge music festivals.