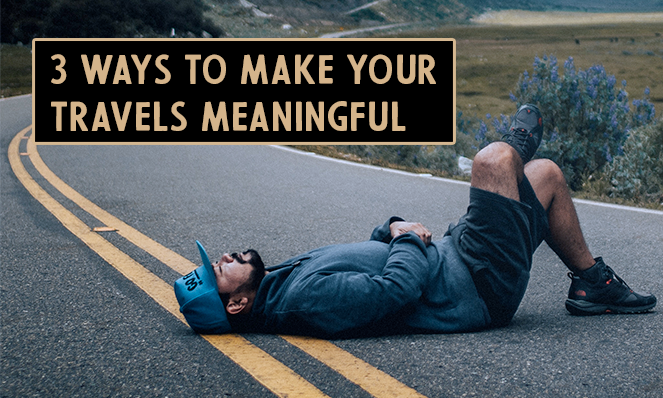 3 Ways To Make Your Travels Meaningful

Living in a country that gets travelers from all over the world, I think about how a hundred years ago, simply getting to another city was a real mission. And here we are now, sailing over continents overnight, falling asleep on one side of the world and waking up on the other. The ease with which we can experience new cultures and different landscapes amazes me. And because it's so easy to travel, the tendency to take it for granted, to gloss over it passively, increases.

I remember how in my early twenties, when I began traveling and flying around regularly, I could gaze out of the plane's window for hours, hypnotized by the infinite blue skies and dense, fluffy clouds. Sometimes I'd have the privilege of catching a sunset, and a fire would ignite in my soul. I knew I was privy to a divine-like occurrence as the horizon became ablaze with color. Purple, orange and red flames danced all around me as I soared beyond them.

Fast forward to just a few months ago, I find myself on a long haul flight and I never once looked out the window. At the end of the flight, it dawned on me that I had been on a plane; I may as well have been driving, as I was utterly oblivious to the experience. The reality is that I genuinely lost my childish wonder. The awe that an aircraft can soar overseas, taking me safely to new destinations has left me.

I've also noticed that my enthusiasm while traveling has died down. It's given way to a passivity that may have something to do with age or perhaps distractions, like screens, worries, etc.

This isn't always easy to do. I know I've been on plenty of trips where I missed the opportunity. Maybe it was because I hadn't researched enough beforehand or because I really wasn't presented with the opportunity. But looking back at my favorite, most meaningful trips, the standout moments are the ones where I immersed myself in the local culture.

One of my most powerful experiences was in Grenada, Spain. I had told our local guide that I wanted to see an authentic flamenco performance. While doing some research, I came across a forum discussing the fact that Spanish Roma (Gypsies) sometimes met on hilltops or caves for impromptu displays of their glorious musical tradition. I wanted to witness that. Being the eager and enthusiastic guide that he was, he did some inquiring. On a Friday evening, he took our group to one of the many hills overlooking the city - at dusk. As the sun was swallowed up by the night sky, two dancers and a musical trio appeared, ready to entertain the few spectators who had learned of their appearance. The sky threw hues of gold on us while the dancers seduced us with their swaying movements. It was a moment that has stayed with me. Witnessing this spectacle, I felt incredibly alive.

As the dancers’ eyes briefly locked with mine, I realized that if I hadn’t done a little bit of research and asked for help from a local, I would not have been magnanimously rewarded with a glimpse of the vibrant Spanish Gypsy culture.

To experience local culture, some prior research might be necessary and a willingness to access it by asking the locals for help, which brings me to my next rule.

New perspectives, a different worldview, traditional knowledge, these are just some of the riches locals have to offer us. My warmest and even most tender interactions, albeit brief at times, have been with local people.

I remember walking down a dusty road in Zakynthos, the afternoon sun fiercely beating down on me. My afternoon was free and I looking for a convenience store. I'm not sure what I had to buy and why it couldn't wait, perhaps the urgency was providential. As I walked by a small bungalow, a smiling elderly lady waved at me from her terrace. She was cutting melon into big juicy slices. My mouth watered as I waved back half-heartedly, the sun rays having soaked up all my energy. She beckoned me over and said something in Greek. I cautiously walked up her driveway and she came to greet me, smiling broadly. She was pushing a big chunk of melon up towards me. I was taken aback and I had no idea how to thank her in Greek so instead, I performed a deep bow. She laughed and gave me a hug, jabbering away in Greek the whole while. She was so familiar, like a long lost grandmother. I think of her fondly, her desire to share a cold fruit and a warm hug with a strange overheated traveler who did not even know how to say hello. I treasure that moment fondly; it has inspired me to treat travelers to my own country with care.

Another time, while on my honeymoon in Laos, I went on a private guided hike to a waterfall. The timid guide, Thin, spoke painstakingly little English so my husband and I chatted mostly with each other. Suddenly, it dawned on me that this was a nature expert who held a wealth of knowledge. I decided to try a little bit harder. So I started gesturing to random plants on the trail and asking him about their use. Thin opened immediately and made us curl up in laughter and as it turned out, his English was much better than I had initially thought. Using his pocket dictionary and all sorts of theatrics and acrobatics, he showed us what certain plants were for. We learned about local practices and remedies. He shared stories about his family, local delicacies (snakes and lizards), censorship, and his fear of getting married despite the cultural pressure. In six hours, he became a little brother to us. My husband and I felt truly blessed by the interaction and by the learning experience. The icing on the cake - he brought us to the riverside home of some friends of his. They lived off the land, fished from the mountain river, and grew their own vegetables. They gave us a rare and precious glimpse into Laotian rural living.

I hold these people and memories close to my heart. I was a bit skeptical prior to both encounters but a little bit of openness went a long way. To make connections with locals, all you need is an open heart.

Nature is healing. It heals the psyche and it heals the body. From the silence of the forest to the roaring of the sea, from the brilliant green to the many shades of turquoise, nature regales the senses. Japanese researchers did a study on people who spent extended periods of time in the forest and found that they were less likely to develop cancer! And the benefits of seawater are well documented.

Perhaps it is because nature invites us to relax as the pace slows, perhaps it is because as humans, we are attracted to beauty. Or is it because life abides in nature, and that presence of lively energy invigorates and restores inner balance? Have you ever heard the songs of birds all around and felt instantaneously less crowded? Have you ever stood by a rushing waterfall and felt the energy of the water transfer into you? Scientifically speaking, the negative ions in water are said to increase the flow of oxygen to the brain.

Make nature a part of your travel as it said to increase your feelings of wellbeing, to make you more alert, to elicit loving and kind behavior, to give you more mental energy and help you sleep better. And these are essential for a truly meaningful travel experience.