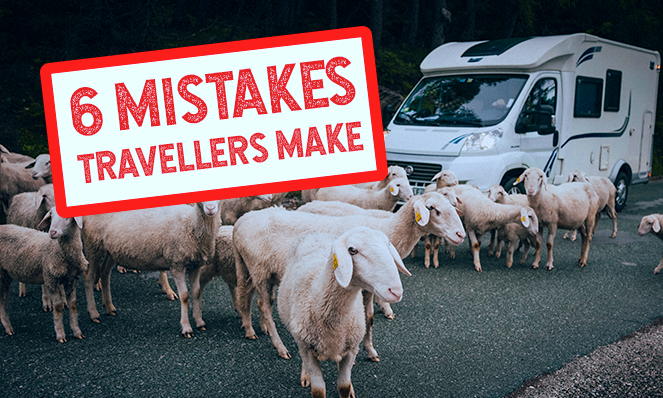 I've made so many mistakes while traveling. It's embarrassing. My lowest low was without a doubt in Nicaragua, back in my early traveling days. I forgot to book a cab to take me to the bus station, it was 2 am, and I had no phone and no ride. Stranded and desperate, I knocked on a parked car's door, pleading with the driver to take me to the bus station, final destination: the airport. Thankfully, the driver was beyond inebriated and laughed at me. The 20-year-old me was beyond naïve (shout out to my host family's neighbor who miraculously found a cab for me).

Although I emerged from my Nicaraguan experience relatively unscathed, some of these mistakes have seriously cost me: I have lost luggage, time, money, flights, friends, and sometimes, my mind. The silver lining is that I’ve gained some wisdom and made many hilarious (sometimes bittersweet) memories. I've also learned that private-guided travel is the best way to travel (and safest) for this scatter-brained dreamer with a bad case of wanderlust.

These are some of the most common mistakes travelers make:

Not checking your bills after making exchanges or purchases

Once, before going on tour in Bogota, I ran out to a well-known mall in the ritzy Zona T. I needed to exchange some money and wanted to buy hair ties. I went into the currency exchange shop, showed my passport, grabbed my pesos and off I went. I checked to make sure I had the right amount as the savvy traveller I thought I was. The next day, I was paying my tab at the hotel bar when the bartender pointed out that I had given him a fake 50 Mil Pesos bill (just under $20 US). The difference between a real bill and the fake was obvious, he demonstrated. I had taken the bill from my exchanged stash so I knew right away where it had happened. I walked straight out of the hotel and straight back to the exchange shop. I was not happy. It wasn't a pretty scene and I only got genuine bills when I said I'd get the police involved. All this could've been avoided if I had checked the bills on the spot. Or better yet, exchange money at home. That said, every country is different, this is something to research before heading off. But as a general rule, I now check the change I've received after a purchase, making sure it's both the right amount and legitimate.

Accepting free stuff - like people reading your palms for "free"

For the Spain-bound travelers (but not only), and especially females, be warned: you might get accosted by elderly ladies wanting to read your palms. Granada and southern Spain, in general, is a "palm-reader" hub. They'll swoop down on you so fast; pull at your hand saying "free, free!" and then demand money before you even know what hit you. And they won't leave you alone until you pay them. So, as momma always said, "keep your hands to yourself ". In case you're wondering, yes, I fell for this one, of course. I had wandered away from our guide. The fortune-teller - seeing an opening - pounced like a stealthy cat on a nervous mouse.

Not asking hotel staff for cab cost to destination

My travel buddy and I had a free day in San Jose, Costa Rica and wanted to do some shopping at the Mercado Central. We asked the hotel staff to call a cab for us (pre-Uber days and still, not all countries have taxi ordering apps). The receptionist was kind enough to mention the approximate cost of getting there. I don't know what the driver did, but he and his meter demanded three times the cost the receptionist gave us. We told the driver the estimated price we had anticipated, and he made up a half-assed explanation. And then proceeded to "give us a deal" and cut the price in half. So, we still overpaid but it could've been worse.

In general, cab costs should be discussed with the hotel receptionist and agreed upon with the driver (and his meter) before ever setting off.

Talking to strangers on the street

Thailand and Myanmar, beautiful lands of great food, lovely scenery and scams. And they all started on the street.

My husband and I fell for a record number of scams while in Thailand. All easily avoidable. One evening, after our half-day Bangkok tour, we decided to see Wat Pho temple by night and off we went - by Skytrain. The Skytrain experience arguably made the scam worthwhile (the sight of the cleaning ladies who come in at the end of the line to sterilize the train in a matter of seconds is intense!). We got off at our stop and on the street; the “Tourist Police” approached us, they told us the temple was closed due to religious observation. “But did we know that an even better temple was just a few miles down the road? Oh and how convenient - a tuk tuk driver right here who would gladly take us for a hugely discounted price.” Who could refuse? And so, we sped away in the tuk tuk that finally dropped us off on the shore of a river. There, we were expected to take a riverboat to reach the prized temple, for a mind-boggling fee of course. No thanks. We had no idea where we were though and suddenly there were no tuk tuk’s in sight. So, we walked to the main road and to our relief, saw a monument we recognized (thanks to The Hangover II): The State Tower. We were now miles away from our originally intended destination but the amazing view at the Sky Bar helped us forget.

Funny enough, the next evening we were scammed in a similar way, this time we kind of knew it was happening, but we were curious to see where we'd end up: An emerald store. Typical. Where my husband put on a fine show pretending that he had been looking for something shiny for our anniversary.

Myanmar is much the same when it comes to scams (they're elaborate and commonplace). Beware of offers to take you places to visit or buy incredibly priced items.

It is always best to hop into a shop or a taxi (of your own choosing), the chances of meeting someone whose interests lay elsewhere than scamming tourists is greatly improved that way. And so I'd say, when in doubt, "Don’t talk to Strangers"... especially off the street.

Enough of the scammers, let's talk about mistakes that are entirely within our control.

Not making use of your carry-on

Back in the day, before I had been personally affected by the woes of lost luggage, I used to fill my carry-on with various kinds of footwear, entertainment and whatever didn't fit in my checked bag. Then my husband lost his luggage on a Euro trip and that made us learn the true value of the carry-on. What good is an SLR camera and drone when you don't have underwear and a t-shirt? Since then, my carry-ons contain all my hair and face products in 100 ml bottles, as well as 6 outfits, two PJs, something warm and comfy footwear.

Also, pro tip, by far the best space-saving way to pack is by rolling your clothes. It's scientifically proven, look it up!

Taking pictures instead of living the moment

I know, I know. Snapping an Insta-worthy photo is a big thing, especially in a gorgeous setting. All too often, I see these sleek tourist ladies showing up at the beach with their boyfriends in tow, taking at least a hundred pictures of their booties and then poof, they're gone. Did they notice the swaying palm trees, the seven shade of turquoise, the tiny silverfish in the water? These small pieces of bliss are uplifting, calming and healing but with a screen distracting us from the view, it's hard to reap the benefits.

So soak it all up, truly live the moment for you (and not just Instagram); taking pictures for others to enjoy can be part of the experience but only as a second thought.