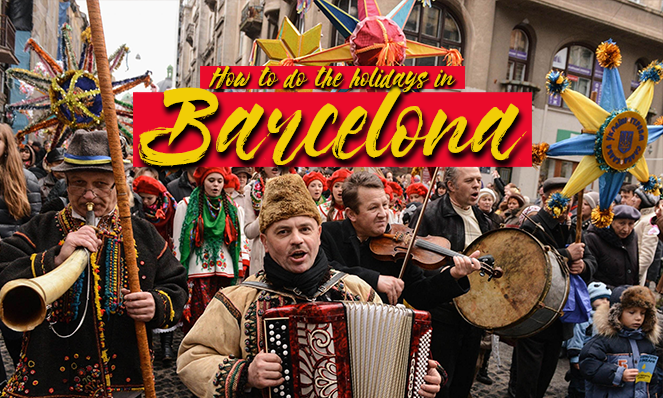 Barcelona For The Holidays: What To Do, See, And Experience

If Barcelona isn’t on your bucketlist to visit for a holiday season, it should be. Rich in culture, long-lived traditions and eclectic history, the city is ripe with magic, beauty, and festivities, and the occasional slightly-puzzling traditions that make it all the more interesting to dive into. If you have a trip planned this holiday season, look into this guide for what to do and experience this year. If you don’t have your trip booked yet, this guide will help you browse some of the traditional, and not-so-traditional cultural elements of Barcelona’s holiday scene, and where to shop, hear excellent music, eat, and visit during your future stay.

Barcelona has its primary roots in Catalan history, so many of the holiday traditions have originated with its strong emphasis, along with Christian elements. The early Christmas celebrations kick off on December 8 with the Feast of the Immaculate Conception. Decorations abound throughout the city, and Nativity scenes are a primary feature. The realism of each Nativity scene is a big focus, so moss, small utensils, tiny stoneware jugs, and plates are used to make the authenticity complete. On the Catalan side, the somewhat quizzical “caganer” is added to the mix, a symbol of health in his own way of adding to the good harvest, depicted in a man taking a - shall we say - bathroom break in the middle of the Nativity gathering. The tradition dates back to the 18th century and is considered a sign of good luck, so try not to get offended!

To see the city’s official outdoor nativity scene, head to Plaça de Sant Jaume, where it will be on display from November 29th to January 6th this year, from 10:00 am to 10:00 pm daily. We can’t say if the caganer will make an appearance there this year, but you’ll be sure to see it in some of the smaller scenes throughout the city and in the marketplace if you’re looking for a truly one-of-a-kind souvenir to bring home to your family.

Another Catalan tradition, the “Tio de Nadal”, is a log with two legs bearing a red hat and a smiling face. Kids are tasked with feeding the log and keeping it warm with blankets leading up to Christmas, and, in another of Catalan’s interesting traditions, beating the log with sticks. In the end, the log ‘gifts’, or poops, as the tradition goes, candies and nuts for the kids. I’m guessing the adult members of the family might get a kick out of the tradition too, if the holiday is feeling a bit stressful. 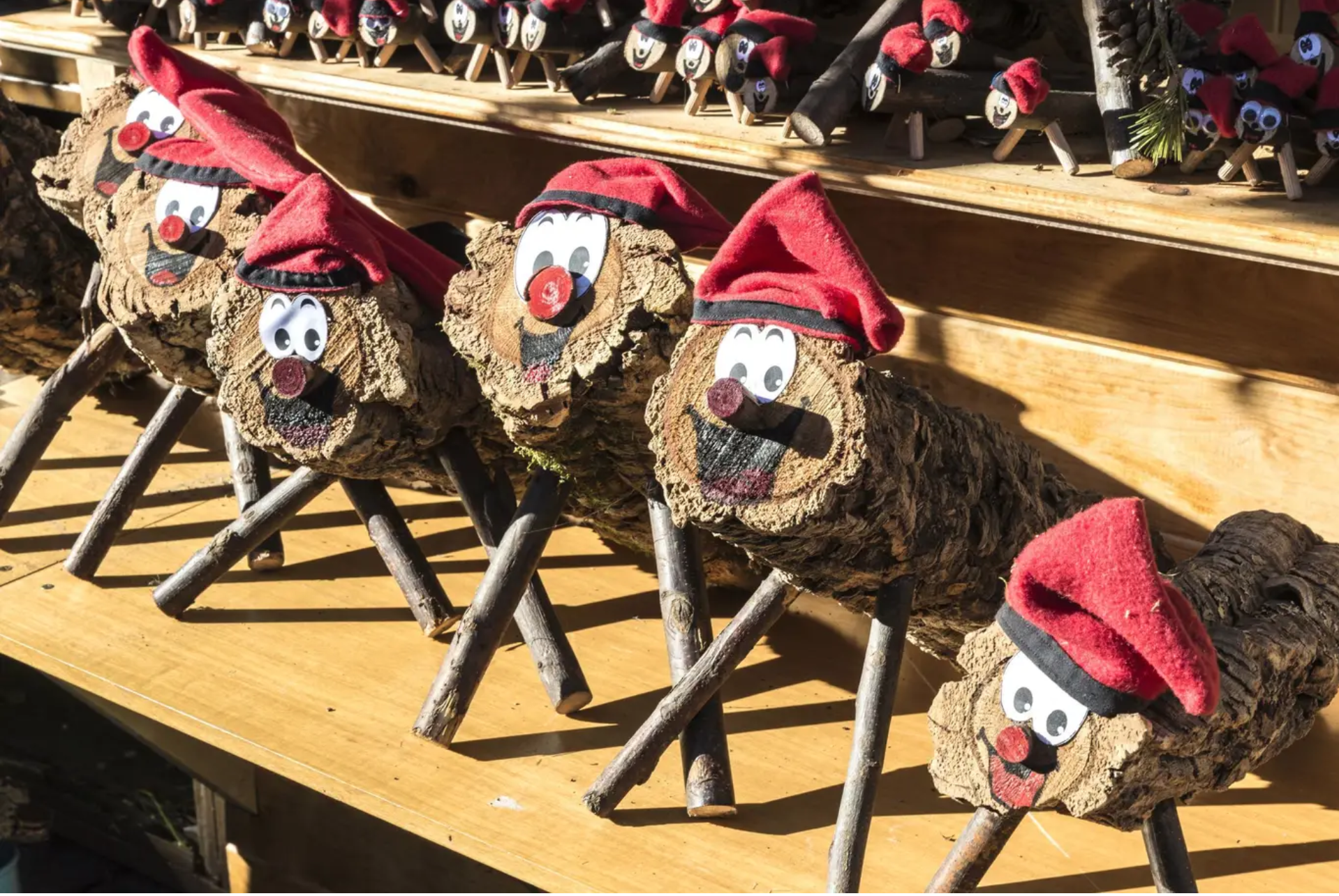 Unlike the rest of Europe, Christmas is not the biggest day to give gifts. A big meal with family or a meal out, followed by a visit to friends and a small gift exchange usually rounds out the night. Gift exchange usually takes place on Three Kings’ Day, but more on that just below.

New Year’s is celebrated in full fanfare. The official party is held at Plaça Espanya, one of Spain’s most emblematic central squares, with a music and light show, making it a great spot for families to gather. The show involves a fireworks production and concert, and about 80,000 visitors annually gather to take in the massive production. Be sure to grab grapes at the local supermarket or fruteria, tradition states that eating 12 grapes ensures good luck for the coming year. 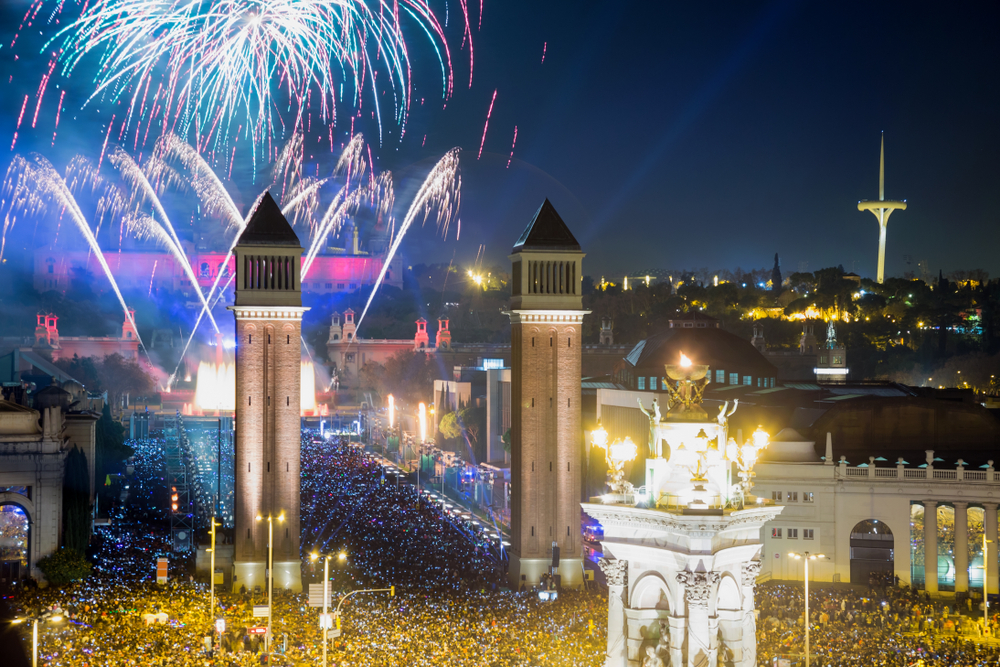 Three Kings Day, or Dia de los Reyes Magos, is considered the most important day for families and children. Based on the original three wise men who came bearing gifts of gold, frankincense and myrrh to the newly born baby Jesus, it is the day when the three wise men arrive in Barcelona (and around the world) to deliver gifts to worthy boys and girls. Held on January 5th, the three wise men arrive in great fanfare by boat, and dock in Port Vell, followed by a grand parade through the city, greeting the crowds and giving gifts of candy for the kids along the parade route.

January 6th, Epiphany Day, is celebrated by gifts being exchanged in keeping with the gifts of the Three Kings. It’s also the day to try some “tortell de reis”, or King’s cake, a round, stuffed pastry cake that usually has a small king, or some other token representative of the King’s day, inside. Whoever gets the slice of cake with the prize gets to be king for the day. If you end up with a bean, on the other hand, also hidden within the cake, well, you get to pay for the cake.

The Tio de Nadal, caganer, and more holiday goodies can be found at the Santa Llúcia Fair, held every year since 1786 in front of the Voltants de la Catedral de Barcelona. The fair runs from November 29th to December 23rd, and is home to more than 200 stalls offering anything you could think of for the holidays. One section offers nativity scenes, figures and accessories such as caves, candles and Christmas decorations. In the “greenery” section, natural and artificial trees, moss, tió pooping logs, cork, eucalyptus branches and more. In the crafts section, you’ll find things such as clothing, jewelry, and decorative and gift items. And in the music section drums, tambourines and other traditional Christmas instruments can be purchased. One can also jump into courses organized by the city’s nativity-scene makers association, and performances by traditional dance groups and music. 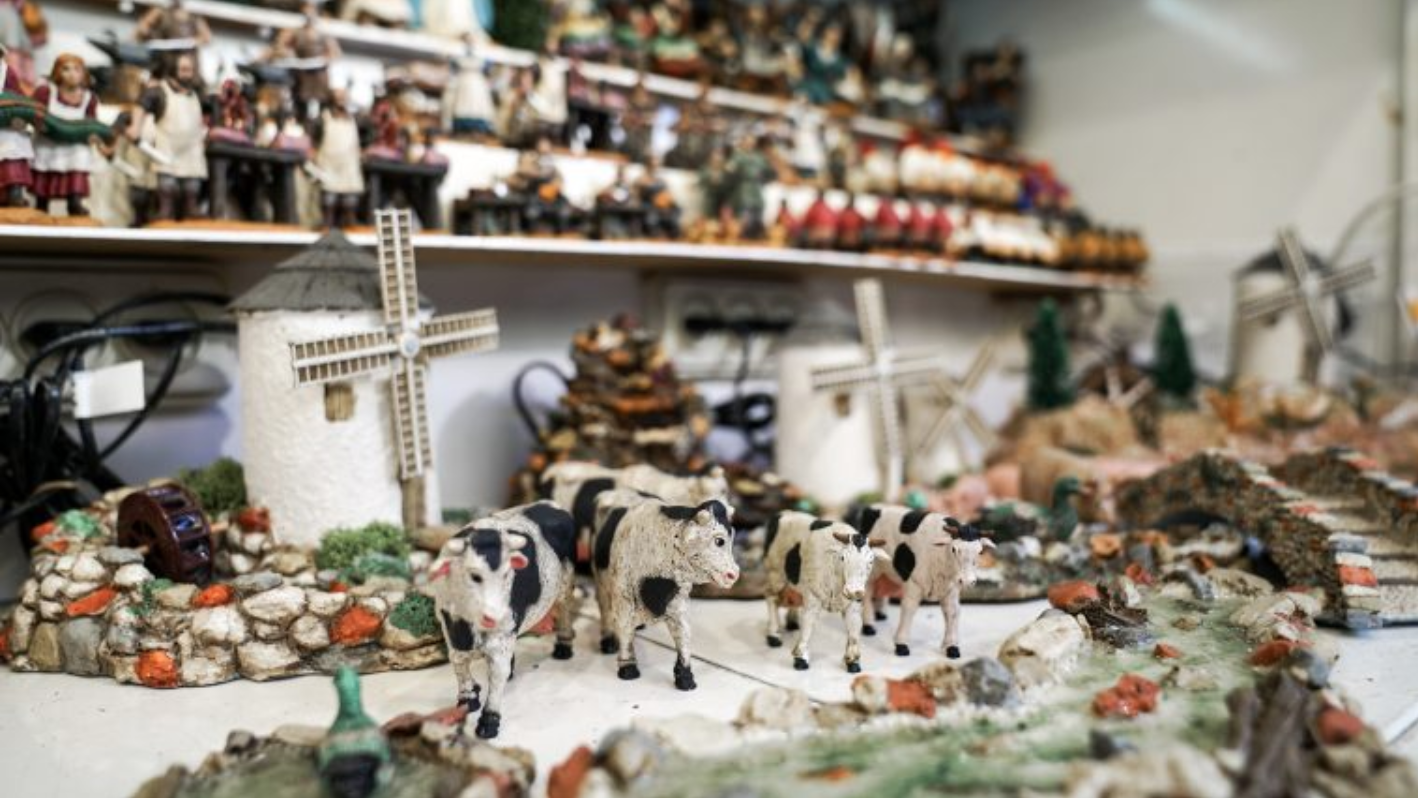 You can also head to Port Vell, where a newer Christmas market is held, also with craft and food stalls, Christmas activities, a floating nativity scene a vintage carousel and a nearly 200-foot-tall Ferris wheel.

And in the Poble Espanyol Spanish Village, on Montjuic hill, you’ll be able to shop with local artisans. The village was built for the 1929 Barcelona International Exhibition for visitors to experience a typical "Spanish village", complete with 117 buildings, streets, and squares, representing different styles from regions of Spain. Only intended to be open for six months, the village was such a success it remains until today. This year, from the 21st to 29th December, the village will host a Christmas food fair, roller disco, live music, Santa's Grotto and meeting The Three Kings. There are also forty art and craft workshops, focused on showing the historic Spanish handmade production techniques in ceramics, engraving, decorative painting, glass blowing, puppet-making, jewelry, masks, fans, sculpture, leather, embroidery, basket-weaving, musical instrument-making, espadrille-making and more. 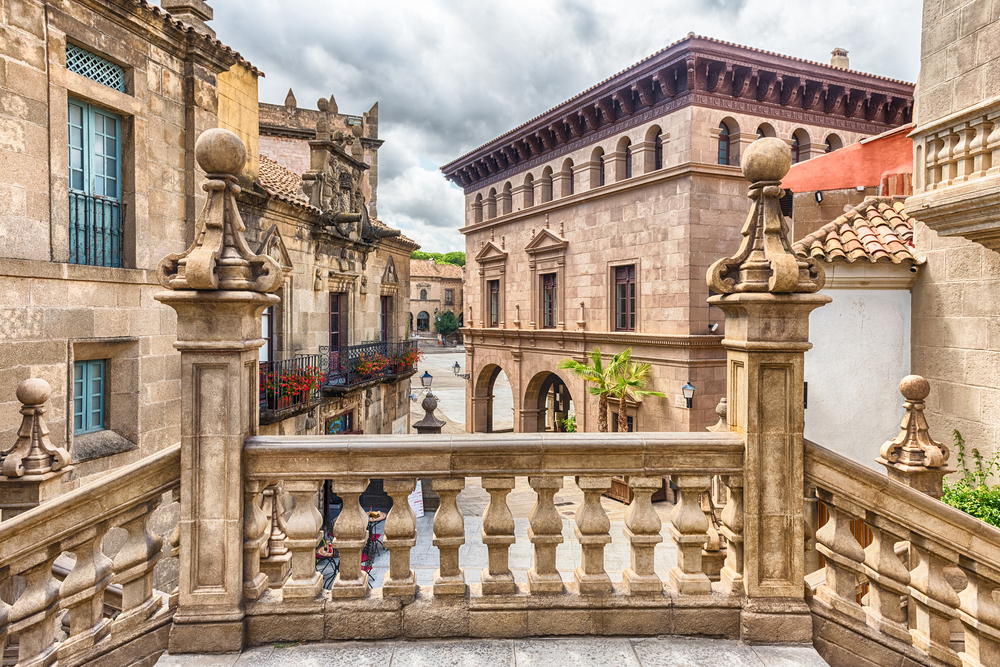 And on Christmas Eve there is a midnight mass at the majestic gothic basilica Santa Maria del Mar during which the "cant de la Sibil·la" is sung.

Bodega La Palma is known for its traditional Catalonian style meals such as patatas bravas and crema catalana, and Christmas is prime time for Bodega to shine. Their set menu combines the traditional and the modern sides of Catalan cuisine, with items like salt cod with mushrooms in romesco sauce, and Iberian pork tataki with sweet potatoes. Reservations are hard to come by for the Christmas eve seating, so be sure to reserve your table in advance. 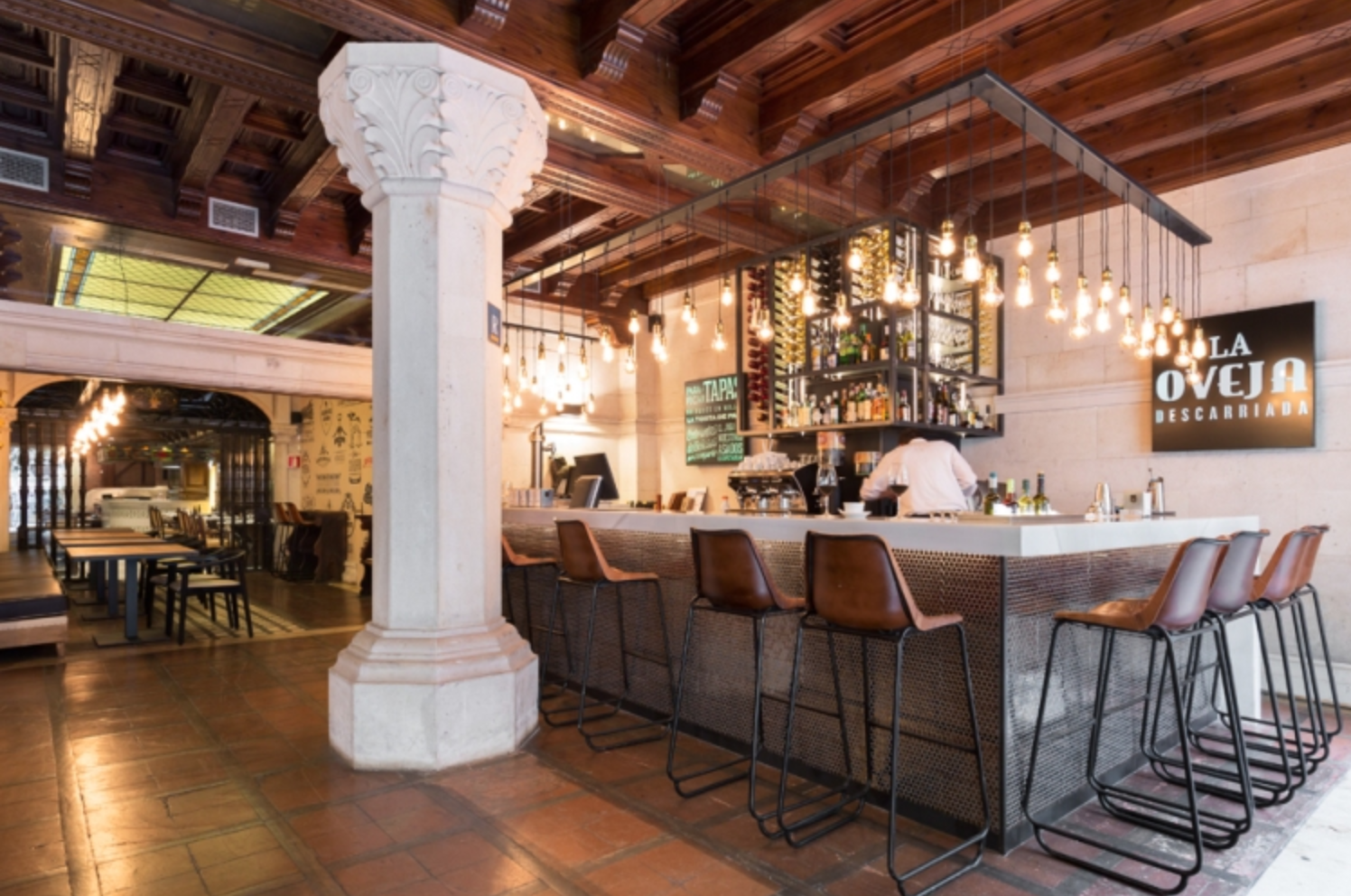 We hope you find your way to Barcelona this holiday or in the future, to explore all that the city and its people have to offer. If you’re thinking of visiting Spain let us know what you’d like to see! We’d be happy to help create an unforgettable experience sure to be one of your most memorable journeys.