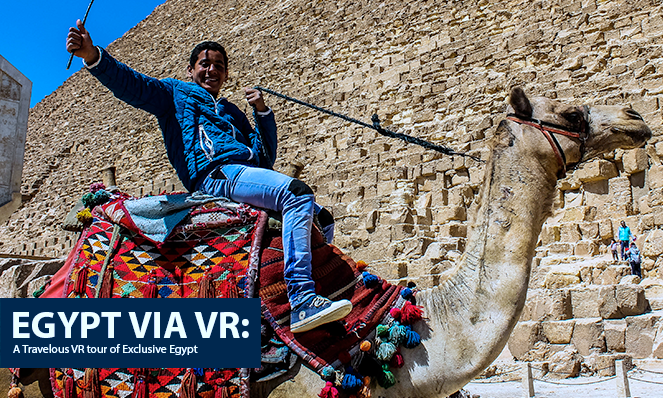 Travelous – Egypt via VR: An Exclusive VR tour of Egypt

Welcome to this month’s edition of Travelous via VR! This month we Explore Egypt, a cradle of civilization with one of the longest histories of any country, and a heritage that traces back to the 6th millennia BCE.

To get a sense of how incredibly varied Egypt really is, check out this video from Experience Egypt:

We’ll dive into the Great Pyramids of Giza and Dashur on this tour, cruise on the Nile, sail to the ancient city of Thebes, visit temples, antiquities, museums, and soak up the sun in Hurghada on the Red Sea. Egypt is slowly beginning to reopen, so there’s likely not a better time to start planning that bucket list trip you’ve always dreamed of. We’re happy to help in this case. Book now worry-free with 100%-travel credit up to 30 days prior to your trip start date. Visit the link at the end and let’s get started!

Cairo is known as "the city of a thousand minarets" and is the largest city in the Middle East. On the west side lies the capital of the Old Kingdom, Memphis, which is still alive with ancient grandeur and triumph. To the east, the beautiful Garden City, with its lush, sprawling gardens and expansive, ornamental palaces, captivates. The city has everything from medieval markets to oriental dance shows, Roman ruins and the mighty Pyramids of Giza & the iconic Sphinx. You’ll settle in for your first night in Giza with the Pyramids as your backdrop.

Today, your Travelous private tour takes you to Dahshur, 25 miles from Cairo, where you’ll explore the royal necropolis on the west bank of the Nile. Primarily known for several early pyramids, two of which are among the oldest, largest and best-preserved in Egypt, built from 2613-2589 BC. Here, you’ll explore the Bent Pyramid & the Red Pyramid, which were constructed during the reign of Pharaoh Sneferu (2613-2589 BC), father of Khufu of the Old Kingdom. The shape of the Bent Pyramid is unique; it represents a transitional pyramid form believed to have been the result of an engineering crisis encountered during its construction. The Red Pyramid is the world's first true smooth-sided pyramid.

At dusk, you’ll head out on a sunset camel ride through the sand dunes towards the Ancient Pyramids of Giza, one of the most Instagram-worthy experiences of your trip.

Today, you’ll be joined by your private certified Egyptologist and set out to explore each of the three famed pyramids of Giza. Later, you’ll head to the Solar Boat Museum, to see the intact solar ship vessel from Ancient Egypt.

Explore the only surviving Wonder of the Ancient World, the Great Pyramid of Giza, with BBC, here:

Stand in the footsteps of Pharaohs at the base of the Sphinx, the enigmatic symbol of Egypt for thousands of years. After lunch, visit Saqqara, the vast, ancient burial ground, which served as the necropolis for the Ancient Egyptian capital, Memphis. Your guide will lead you through the history of the famous step Pyramid of Zoser, and then on to Memphis, where you’ll explore artifacts from many of the great rulers of Egypt, including the huge fallen statue of Ramses II.

Today, includes a short flight from Cairo to Abu Simbel, where you’ll explore the twin temples, rediscovered in 1813 by the Swiss explorer John Lewis Burckhardt after the sands of the desert had nearly buried them completely. All but the tops of the heads of the huge statues in front of their entrances were visible at that time, but by 1909 the sand was finally cleared away, paving the way for the temples to become the most famous site in Egypt's south.

For a glimpse of the festivities of the Sun Festival, and what makes this temple so spectacular, watch this video from Mundo Sem Muros:

A short flight from Abu Simbel is Aswan, where you’ll explore Egypt's southernmost city, arguably one of the most visually stunning in terms of its location and geography. Once the gateway to inner Africa, Aswan is particularly known for its two dams and blended Nubian Culture. A city that feels distinctly African as opposed to a desert land, you'll explore both the cultural aspects and the Temple of Philae, the Unfinished Obelisk, Mausoleum of Aga Khan, St. Simeon's Monastery and Kalabsha Temple.

For a look at the Temple of Philae, watch this beautiful video:

Today you’ll visit the Temple of Kom Ombo, remarkable for it its double design. Walking through the temple complex, you’ll see how the courts, halls, sanctuaries and rooms are duplicated for two sets of gods. The southern half of the temple was dedicated to the crocodile god Sobek, god of fertility and creator of the world, and the northern part dedicated to the falcon god Haroeris, also known as Horus the Elder. You’ll glimpse a few of the three hundred crocodile mummies discovered in the vicinity in The Crocodile Museum, and then on to the Ptolemaic Temple of Horus, built over a period of two thousand years.

The city of Edfu houses the Ptolemaic Temple of Horus. The inner walls of the building tell the mysterious story of Horus coming into existence: born upon the death of his father, Osiris, the god of the underworld who was killed by his brother, Seth. The much-beloved goddess Isis brought Horus to life from a piece of Osiris' flesh. Horus later battled Seth and won the battle but lost an eye in the process. Hence, the eye of Horus has important religious symbolism in ancient Egyptian mythology.

Day seven takes you to the Valley of the Kings to witness the intact royal tombs of the Pharaohs in the Valley of the Kings & Queens. The magnificent temple of Queen Hatshepsut at Deir El-Bahri and the immense Colossi of Memnon are part of your journey, where you’ll see the two massive stone statues of Pharaoh Amenhotep III. For the past 3,400 years, they have stood in the Theban necropolis, across the River Nile from the modern city of Luxor. Beyond, explore the Theban Necropolis, which was used for ritual burials during pharaonic times, and the tomb of King Tutankhamen, regarded as the world’s most famous Pharoah.

Have a peek at Luxor’s wonders here:

The East Bank of the Nile is visited today, bringing you to the Temples of Luxor and Karnak, largely the work of Amenhotep III and Ramesses II, whose colossi and obelisk stand at the entrance. You’ll walk along the Avenue of Sphinxes while learning about how the massive facade was constructed, and then explore the Karnak Open Air Museum that features an amazing array of statuary and reconstructed temple structures.

To get a feel for how vast, and breathtaking Karnak is, watch this video from UCLA:

You’ll spend three days in the seaside town of Hurghada and more specifically, Soma Bay, located along Egypt’s Red Sea. Home to some of the world's best diving and snorkeling sites, the stunning coral reefs & turquoise waters are perfect for diving, snorkeling, kiteboarding, jet skiing, and parasailing, or simply some immersive R & R.

Your final day will be spent on a private tour of the Egyptian Museum awaits. Built in 1891, The Egyptian Antiquities Museum is the second most visited attraction in Cairo. From the prehistoric era to the Greco-Roman period and housing more than 165,000 artifacts, the museum is home to the famous collection of King Tutankhamun and the Royal Mummies. In the evening, you can explore Old Cairo City and El Moez Le Din Allah Street, lined with historical monuments along the way. The stalls and passageways of the 600-year old Khan Khalili bazaar are worth a visit as well, followed by a traditional Egyptian dinner on your last night in the majestic country of the Pharaohs.

Explore the modern, and ancient, elements of what makes Cairo so spectacular:

For more information on this tour, or to design your own Travelous tour, visit: https://travelous.com/make-me-travelous