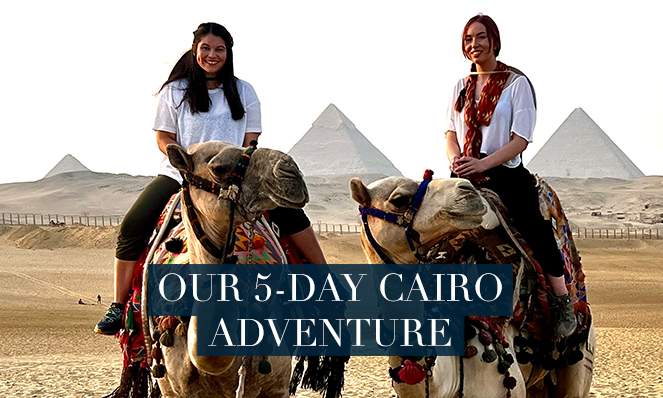 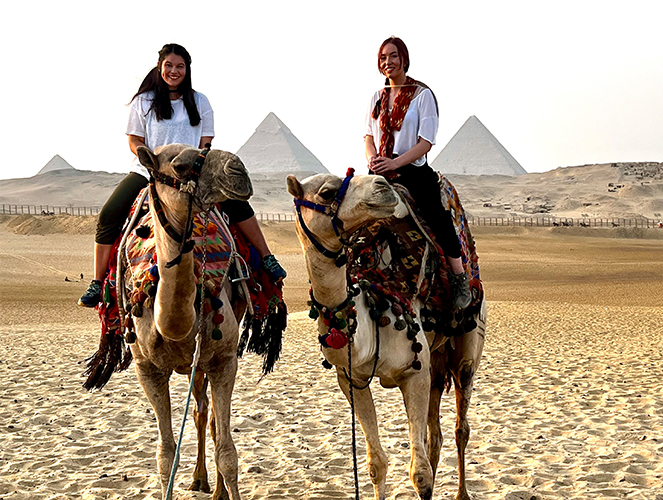 Join us on our whirlwind journey to Cairo. Follow along as we visited the ancient ruins of Memphis and Saqqara, rode camels at sunset, sipped mint tea in the shadow of Giza's pyramids, and much more!

It begins with two slightly tired travelers, (That would be us - Megan & Whitney) arriving in the early morning in Cairo. The sun already beaming down on the yellow sands, with the bustling city waking up for another day. After a quick refreshment, we were ready to start our day by visiting the Egyptian Museum with our wonderful private guide and Egyptologist Eman. Before we write any further, we must mention how lucky we were to have our guide Eman, our travel representative Samer and our driver Ashraf with us throughout our entire trip. They ensured we were safe, having fun, and treated us with the warmest hearts. We consider them all dear friends.

The Egyptian Museum was our first introduction to the Gods and Goddesses. Our favorite had to be the Goddess Sekhmet. You can usually identify her with a lion's head. As our Egyptologist guide taught us, she was a warrior goddess who, when provoked, became a lioness, and as women, we all have a lion in us too. After the Egyptian Museum, our guide and driver took us back to our hotel, the Mena House - a beautiful palace converted into the hotel it is today. 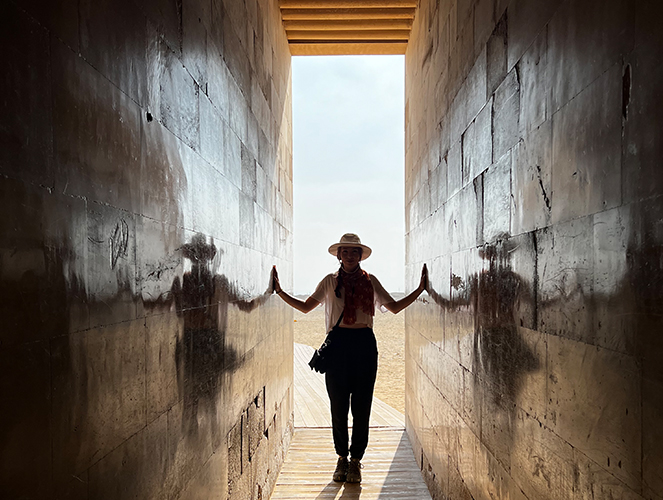 One of the most exciting parts about staying at the Mena House, besides its spectacular pool, was its direct view of the Great Pyramids of Giza. You couldn't ask for a better spot! Every morning we enjoyed a nice cup of tea with the views of the pyramids right in front of us.

The next day we headed off to Saqqara, Memphis & Dashur. Delving into ancient history, starting with Saqqara - a necropolis of Ancient Egypt. We walked into our first Pyramid - the Step Pyramid, otherwise known as the Pyramid of Djoser, considered the oldest in the world. When you enter the Pyramid, you walk down a long passageway with pillars until reaching a deep shaft with the Tomb of Dosjer below. It is said to represent the lungs. Strangely enough, it does feel like you can breathe better in there, with a nice cooling effect as you walk through. Many people from around the world come here to meditate.

After Saqqara, we headed to the Red Pyramid, the largest Pyramid in the Dashur Necropolis. What was most exciting about entering this Pyramid was the surreal experience of climbing deep inside, descending a narrow shaft until reaching the bottom. You'll reach two large, vaulted ceilings, which are absolutely incredible!

Following our whirlwind of adventuring, we went off to fill our stomachs with delicious Egyptian cuisine. One of our favorites was the Moussaka - a delightful roasted eggplant dish served with rice – made famous by the Greeks.

This evening, we rode camels through the Sahara Desert. The experience was surreal, seeing the oasis of Cairo from the peaceful desert, watching the sunset behind the Pyramids of Giza, and the fact we rode Camels. It was an adrenaline rush riding our camels; being so high in the sky, we couldn't stop smiling. Getting up onto a Camel is interesting. It's a two-step process as they stand with their front legs first and then the back legs - make sure to lean your body back, and you will be fine.

The next day was a highlight, visiting the Great Pyramids of Giza and the famous Sphinx. We started in the early morning to avoid the crowds, entering the Great Pyramid of Cheops, the largest Pyramid in the world. The architecture is unique as it defies gravity with the only ascending passageway to a tomb. We also saw the Sphinx on the same day. If you ever wonder why many Egyptian Statues have no nose, including the Sphinx, it is because of grave robbers. The nose is where the soul enters back into the body. So, to protect themselves, robbers often would cut off the nose to prevent deceased kings' revenge. 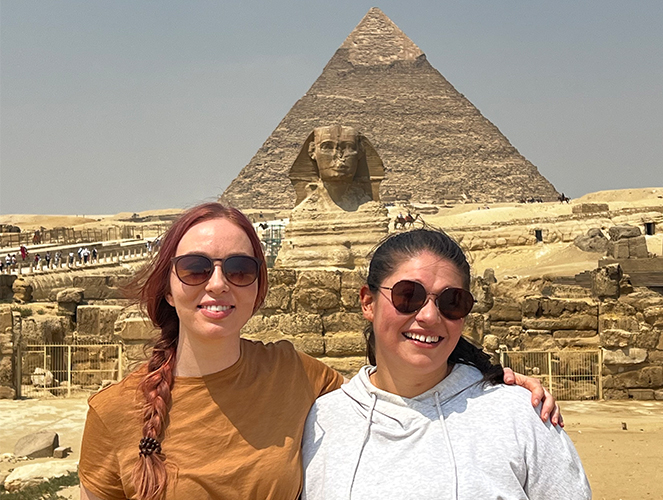 We jumped back into the present day with an evening stroll in lively Old Cairo and Khan Khalili Bazaar. The streets were booming with energy, friendly locals, art, and trades. Our guide even allowed us to participate in carving brass plates with an expert tradesperson. Maybe not our true calling, but it was fun to learn and do! We also visited a beautiful lamp shop. The owner was very kind, turning the lights on so we could see the stunning patterns lighting up the room.

On our last day, we visited two Mosques and the Civilization Museum. The Mosques both hold unique histories. The Al-Nasir Muhammad Mosque is less traveled, much older, but just as beautiful. We also enjoyed the peace you feel in this space, with fewer tourists and warm, inviting colors. The next stop was the famous Mohammed Ali Mosque (Alabaster mosque). The stunning architecture, with white Alabaster brightening the space, perfect symmetry throughout, delicate designs, and hanging lamps, all set a balanced space for prayer.

Civilization Museum is a must if you want to see the Kings and Queens of ancient Egypt. The Royal Mummies Hall includes 20 royal mummies, 18 kings and 2 queens. You walk through a silent room with glass enclosures protecting each mummy. This allows visitors to step up close, seeing little details, from the fingernails to tiny hair stands. Each mummy had unique characteristics, like Queen Hatsheput's arm that stands out instead of resting on her chest. The reason was that she was bound so tightly when they buried her that her arm bounced out when she was rediscovered and unwrapped. We think it also speaks to her defying nature as she ruled during a masculine era and broke many gender barriers, including creating a female Sphinx. We also saw the oldest human skeleton in the world here, 3.67 million years old, named Little Foot. The museum is filled with artifacts depicting centuries-old surgeries, astrology, mathematics, and trades that we still use today.

It was hard to say farewell to our new friends in Egypt. We have taken home memories that will last a lifetime. From the history we learned from our caring guide, walking in the footsteps of Kings and Queens, and climbing inside ancient pyramids, to sharing uncontrollable laughter with our very witty airport rep. Egypt, thank you for having us. You are exceptional!