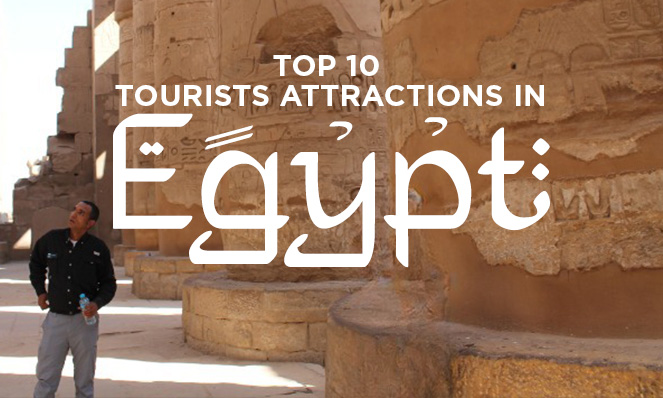 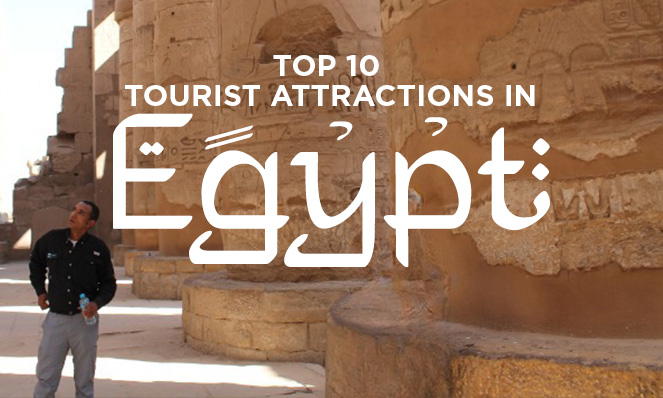 Egypt is a destination many people dream of visiting. The country dates to the time of gods and pharaohs and bares many monuments and remains that show signs of its history. Before planning a luxury trip to Egpyt, you must explore the prime attractions to visit in egypt. some of prime attractions are Pyramids of Giza, the Great Sphinx, and many ancient mosques and temples.

If you are lucky enough to plan tour to Egypt, you may be overwhelmed by the many attractions it has to offer. It is hopeful that you can see them all. ,  But if you must narrow it down, here are top 10 places in Egypt you won’t want to miss out on. 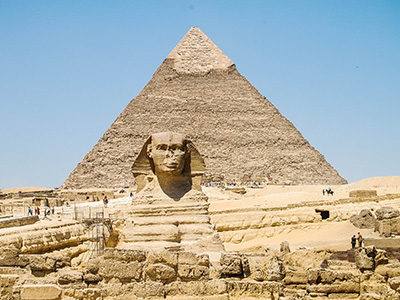 The Pyramids of Giza and the Sphinx

The Pyramids of Giza are a wonder of ancient egypt architecture shrouded in mystery. They consist of three main pyramids named for Kings Khufu, Khafre, and Mekaure. While they were built in that order, the exact year they were constructed is somewhat unclear. However, they are known to have been built between the 26th and 25th centuries B.C.

There is also much speculation on how the pyramids were built. Many believe that some sort of ramp was used to move the blocks into place. When completed, they were encased in a white limestone that has since mostly worn off.

The pyramids themselves are impressively fashioned. Although each differs in size, their tips are almost precisely aligned. They also each have a mortuary, a valley temple, and a causeway that connects them. They all have their own smaller pyramids known as satellites or queen’s pyramids.

The Sphinx is a 241-foot monument carved out of limestone and bedrock. It is located in the valley temple of Khafre’s pyramid at the Giza plateau. An uncompleted temple dedicated to the monument stands nearby.

The monument features a man’s face and a lion’s body. It resembles a creature popularly seen in Middle Eastern, Greek, and Indian mythology. During the spring equinox, the sun sets on its shoulder.

The Sphinx is associated with King Khafre and its face may have been designed to resemble that of the ruler’s. Although it’s unclear why it is so named, the word sphinx can be translated to ‘strangler’ or ‘constricted’. It has been well preserved by the culture for thousands of years. 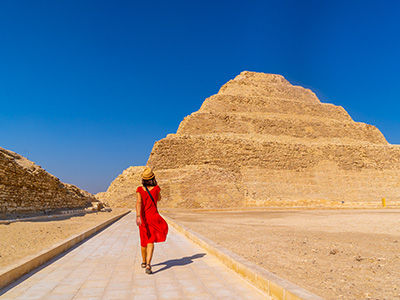 Located outside of Giza. Saqqara served as the necropolis for the ancient Egyptian capital of Memphis. It contains ancient royal burial grounds, several pyramids including the Step Pyramid of Djoser, the Unas Pyramid and many mastaba tombs. It covers a total of 4.3 x .9 miles.

The Step Pyramid of Djoser is particularly impressive as it was built during the Third Dynasty and it is the oldest complete stone building complex standing today. The village also features pyramids built by Egyptian kings in various states of preservation. Private funeral monuments were added by high officials during the Pharaonic period.

This area is a noted location for non-royal burials and cult ceremonies that have taken place over the last 3000 years. 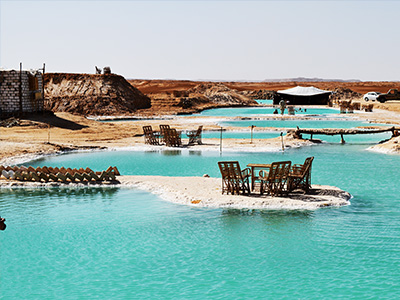 The Siwa Oasis is an urban oasis that lies in the Western desert between the Qattara Depression and the Great Sand Sea just east of the Libyan border. It is believed to be home of the oracle of Ammon, an ancient Egyptian deity. The ruins are a popular tourist attraction.

The Oasis sits in a deep depression about -19 meters (-62 feet) below sea level. Archaeologists estimate that it may have been settled in the 10th millennium BC as evidence of its existence dates to the 26th Dynasty when the necropolis was established. It is about 6 miles long, 4-5 miles wide, and it has about 20 streams.

The area is inhabited by a Berber-speaking Sudanic population that live in mud brick houses in the oasis. It is an extremely fertile land rich in date palms and olive trees. The export of dates and olives help fuel the region’s economy. 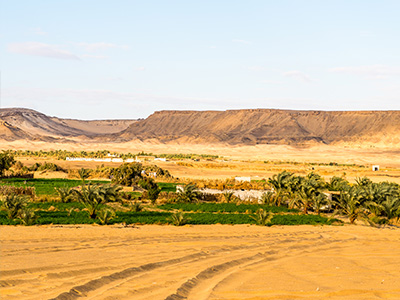 The Bahariya Oasis is one of the most attractive Egyptian desert oases. It sits just 365 km. (226 miles) from Cairo, and is therefore, among the most accessible. It is dotted with natural springs and date palms and surrounded by a landscape of rocky and sandy mesas.

The oasis was a center of agriculture in the Middle Kingdom and in Roman times. It was a main source for wine production sold in the Nile Valley during that time. Its strategic location in the Libya-Nile Valley makes it a prime center for trade to this day.

In recent years, it has brought forth archaeological finds such as the Golden Mummies making it a popular tourist location. It features several attractions including the White & Black Deserts, the Al Hayz Water Education Center, UNESCO Heritage site Wadi Al-Hitan (Valley of the Whales), and the impressive pyramid shaped mountain Gebel Dist, and more. 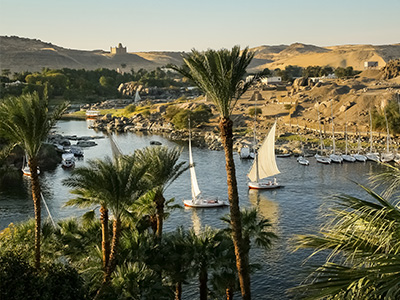 If you want a taste of Nubian culture, Aswan, Egypt offers the ultimate experience. It is rich in vibrant designs that hold meaningful patterns. The welcoming feeling is contagious throughout the southern city on the Nile river and its lush green landscape gives way from the Sahara Desert to resemble the beginnings of a more True Africa we have all come to know.

The Nubian people originated in Southern Egypt and North Sudan and settled along the banks of the Nile. Most work as farmers and are also skilled archers. They have a deep heritage and speak their own language of Nuba.

The people are known for their extreme hospitality. They will take most tourists to the Gharb Soheil Nubian Village which features several traditional homes converted into guest houses.

The villages are surrounded by water and feature some of the country’s oldest ruins, including Philae Temple. They offer plenty to do. You can shop in the local markets, or simply walk around the streets to view the artwork. You can also explore the Nubian Museum to find out more about the rich history of the area.

Mount Sinai is said to be located at the destination where God appeared to Moses in the Burning Bush. It is also the site where the holy relics of St. Catherine are enshrined. It is the oldest continually inhabited Christian monastery dating back seventeen centuries. 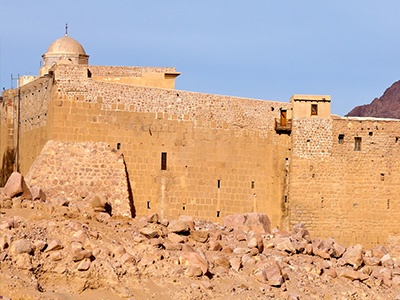 Unlike many other ancient buildings, the monestary building has never been destroyed and therefore bears its original characteristics of Greek and Roman culture. It is a popular pilgrimage site for many. It is dedicated to the Mother Mary and the prophets Moses and Elias, both of whom were said to come to the mountain to talk to God.

In recent times, the site is more popularly known as Saint Catherine’s Monastery. 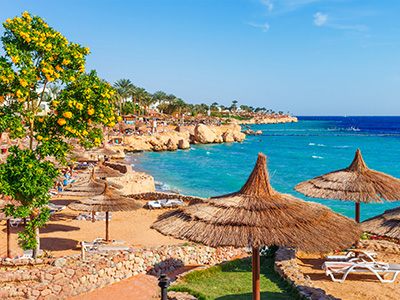 The Red Sea is a narrow strip of water that extends approximately 1200 miles connecting the Bab el-Mandeb Strait, the Gulf of Alden, and the Arabian Sea. Its maximum width is 190 miles, and its greatest depth is 9974 feet. Its overall area is 174,000 square miles.

The Sea contains some of the hottest and saltiest saltwater and is one of the most heavily traveled waterways in the world. Its name is derived from its color changes. Though mostly an intense blue-green, it often shows a reddish-brown color due to its blooms of algae.

It is a popular destination for snorkeling and scuba diving due to its warm, clear waters, vibrant plant and marine life, and high visibility. 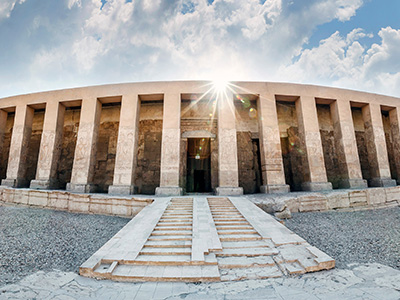 Abydos is one of the most notable religious sites of Ancient Egypt. It is a popular pilgrimage destination as it is believed by many to be the entrance to the afterlife.

There are several temples constructed in the area, but the Temple of Seti is among the largest and most important. It is dedicated to Seti I, the father of the great Ramesses II, who completed the temple after his father’s death.

Seti came into power shortly after the upheaval of Akhenaten’s tyrannical rule and sought to reestablish faith in the area. In doing so, he built the temple with small chapels dedicated to major gods.

Although much of the temple is destroyed, the wall reliefs are well preserved. They are among the finest in ancient Egypt. The site is difficult to reach and therefore, not heavily populated by tourists. 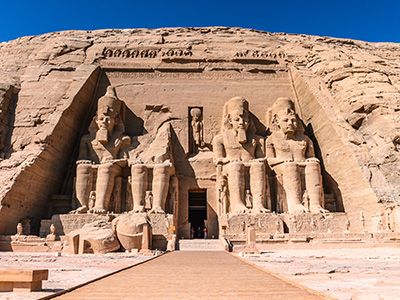 Abu Simbel is the site of two temples built to honor the Egyptian king Ramses II. It was once at the southern frontier of Egypt but is now located in the Aswan governate. It features four large statues of Ramses.

The temples are carved out of a sandstone cliff on the west bank of the Nile. They were salvaged from the rising waters of the Nile River in the 1960’s. They were unknown to much of the world until 1813 when they were rediscovered by a Swiss researcher. They were later explored by Egyptologists in 1817.

The site features (2) 66-foot seated figures of Ramses set against the face of the cliff. One sits on either side of the main temple entrance. Small figures are carved at their feet representing his children, his mother, and his queen Nefertari. There are inscriptions of the Greek alphabet surrounding the sculpture.

The temple is dedicated to the sun gods Amon-Re and re-Horakhte and consists of three consecutive halls that extend into the cliff. They are decorated with more statues of the king as well as painted scenes of his war victories. If you time your visit for February 22 or October 22 at sunrise, you will see the sun penetrate the temple and illuminate the center of the shrine. 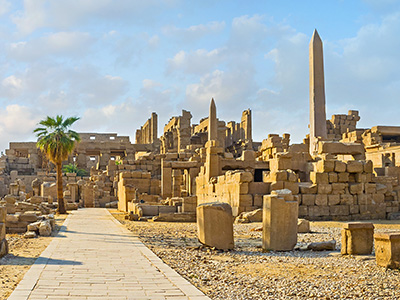 Luxor is one of Egypt’s oldest and most beloved sites. It is often referred to as the greatest open-air museum. It is built on the ancient city of Thebes which have been inhabited since about 3200 B.C.

The city offers many impressive landmarks including the Karnak Temple complex which was once the main Theban place of worship. It is also home to the Luxor Museum which is filled with ancient artifacts. The Mummification Museum showcases human and animal remains.

The main attraction place to visit in Luxor may be the Luxor Temple. It was originally constructed in 1390 B.C. with features added throughout the years by pharaohs such as Tutankhamun and Ramesses II. Highlights include its colonnade decorated with hieroglyphic reliefs and its entrance which is flanked by two giant statues of Ramesses II.

If you head across the Nile River, you will find the necropolis of ancient Thebes. Tourists often flock to its Valley of the Kings where many pharaohs of the New Kingdom have been entombed alongside their earthly treasures. Although many treasures have been lost or stolen, the tomb of Tutankhamun is still mostly intact.

Ancient Thebes is also home to Valley of the Queens where relatives of pharaohs have been buried. Although there are over 75 tombs in this section, only a select few are open to the public. The most famous of these is the tomb of Queen Nefertari which features awe-inspiring paintings on its walls.

Egypt offers so many wonderful cultural landmarks. These are just ten that you should check out when you travel to the area. What other Egyptian sites do you recommend?