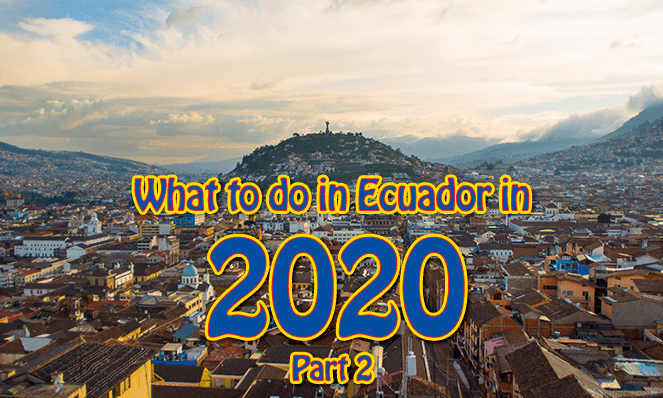 The first half of 2020 was full of music and fun, let’s see what surprise events Ecuador has for us wanderers in the latter half of the year.

In the Andean highlands, the chagras (Ecuadorian cowboys) abide, immersed in a life that is quiet and sometimes wild and lonely, herding cows and other animals through mountain passes. For this festival, the chagras ride down the mountains and into Machachi for a full day of fun and games. From bullfights to parades and from live performances to cultural dances, this is a day to honor those ranchers who live such secluded lives. This festival is also a foodie’s delight, you’ll find every kind of empanada and other traditional food for days.

An athletic competition that takes adventurous athletes out into the wilderness of Ecuador, way up in the mountains where competitors are expected to climb up cliff faces, hike down waterfalls and run through mountain tundra.

There are also portions of this famous race that require passage by bicycle and kayak, as athletes are taken down rivers and through hidden trails. Teams come from around the world and any athlete is able to participate in the race alongside a team. The course is kept secret until one day before the competition begins, giving everyone a fair chance. This is a great chance to explore Ecuador and discover virgin areas of the country where few have dared to tread.

On August 10, Independence Day celebrations are underway all around Ecuador, but especially in Quito. In fact, the whole month is jam-packed with Independence Day-related partying. From military parades to art fairs and from fireworks to Pasillo music concerts, every corner of Quito is in jamming mode. A perfect opportunity to discover the cultural traditions locals are proudest of.

August 10: All throughout the country, especially Quito

The Virgin of Cisne is a 500-year-old festival that celebrates the Virgin Mary, in particular, the day a shrine was built in her name in the village of Cisne. From pilgrimages to dancing and fro processions to concerts, this whole day is dedicated to honoring this hugely revered woman (who happens to appear on little trinkets all over Ecuador).

Every year, 20,000 people visit this fair to purchase genuine artisanal goods, including musical instruments, jewelry, leather and wooden crafts, textiles, glass art and much more. Shop “til you drop or simply enjoy the live performances and delicious food.

This unforgettable music festival brings together local bands and music groups from around the world. Punk rock, hip hop, and metal can be heard on the streets by day and bullfighters can be cheered on by night. It’s a strange mixture of events that has the whole city partying. Even the Teatro Sucre opens its doors to a wide variety of theatre troops, dancers and opera singers.

Quito: September 8 (*the Festival is still not yet confirmed for 2020 according to the website, stay tuned)

Celebrate the delicious Jora beer, the product of germinating seven types of maize. The festival showcases traditional dances, local food, and of course, a tasting competition to decide who makes the best Chicha de Jora.

From a variety of theatre productions that are put on by groups who come from as far as India to local and international visual artists who demonstrate their craft in the middle of busy streets, and from culinary art parties to concerts to dance performances, this interdisciplinary festival covers all the arts in an elaborate display of color and sound.

Giving thanks to Mama Earth for her harvest, communities gather together for an agricultural fair and a number of rituals meant to celebrate femininity.

On this day, an international industrial festival takes place on the Quayquila Marina, and to make the event memorable, concerts, dance parties, parades, exhibitions and markets where vendors sell local and international goods take place.

Using technology, new concepts and a combination of performing arts, the many talented groups being showcased at this festival promise to draw out the most profound emotions. With almost a dozen theatres across the city hosting plays and live performances, this event is a must for theatre lovers!

October: Quito (dates to be announced)

More than 370 local artists flock to the city to showcase their talents, among them painting, sculpting, dancing during this Outdoor Arts Festival. An interactive event that allows artists to converse with the public, this high energy event takes over the streets of Guayaquil.

All over Ecuador, activity ceases as locals, in the ancient traditions of the indigenous people, commemorate their dead. Flowers and lights are brought to the cemetery, musicians come out in the streets to play and cultural foods like guagua (Ecuadorian bread children) and colada morada (special tea with strawberries) is passed around. Truly a spectacle and a rare insight on Ecuadorian cultural practices, this is a day to remember.

November 2: All over Ecuador

Cuenca lights up to celebrate its independence with parades, exhibitions, dance events, and music concerts. The whole city is in jamming mode and the fireworks to bring the event to a close are probably the most elaborate you’ll ever see.

Christmas-related festivities are well underway during the month of December, with events like pig roasts, the formation of nativity scenes (even live ones) and Christmas caroling in the streets and public places. El

Pase del Nino Viajero is a peagant that takes places in every city in Ecuador, with statues of Baby Jesus being paraded around colourful banner and costumed dancers. While Midnight Mass on December 24 is an all-out Christmas affair with concerts and plays, Christmas Day is usually quiet as families gather together at home.

December: All around Ecuador