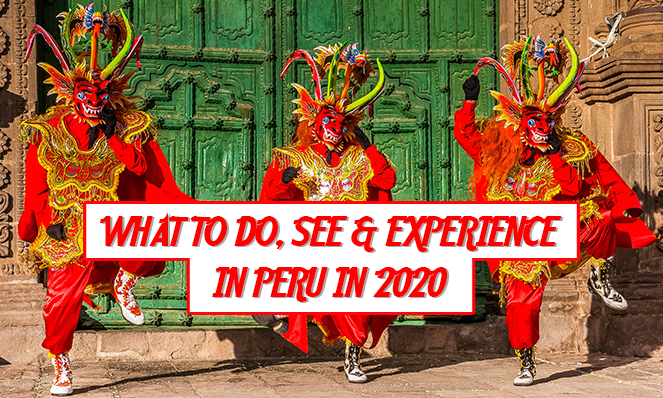 Peru is full of celebrations, ones that  commemorate its Catholic history, honor its Incan roots, and revel in its cultural diversity. Here, we highlight some of our favorite Peruvian events. If you can attend any of them or all of them, you’re sure to find yourself closer to the joy, pride, and passion of Peru’s people.

Trujillo, located on the coast in northern Peru, is the home of the marinera, a traditional dance that involves both men and women waving a white handkerchief and dancing a traditional courtship dance while they flirt (ceremoniously) with one another. The couple is judged for their style, dress, choreography and level of performance. The city has been the official capital of the dance since 1986, and it celebrates each year with a month-long fiesta which covers the entire city. The fiesta features dance competitions, parades, and exhibitions of the Peruvian Paso, a local breed of horse of the Trujillo region.

The ‘Fiesta de la Candelaria’ is the largest and most famous in Peru, and its scale is only eclipsed (in South America) by Rio and Bolivia’s Carnavals. The celebration is a blend of Catholic faith and Andean culture, and brings together dance, music, and the religious heritage of the people. It celebrates the Virgen de la Candelaria, who symbolizes fertility and purity, and Mother Earth.

The celebration is held in the southern town of Puno, and runs for two weeks, starting February 2nd. Depending on the year, the festival may have as many as 50,000 dancers and 15,000 musicians, and over 25,000 people involved in bringing the event to life, creating intricate costumes, music and choreography. Preparation begins as early as December, and the festival has been deemed an ‘Intangible Cultural Heritage of Humanity’, by UNESCO. It’s by far one of the most iconic Peruvian festivals.

Peru’s wines are world-renowned, but it's Ica region is especially notable, and has become home to the International Harvest Festival, or Festival Internacional de la Vendimia. Celebrated annually since the 1950’s, the event combines the workmanship of the wine region’s expert growers and vintners with music, food, parades, the Marinera dance and Peruvian Paso Horse competitions.

There are also activities throughout the wineries in the area, including wine stomping, tastings, food pairings, and a beauty queen competition where the winner leads the crowds in the time-honored tradition of treading the grapes.

Semana Santa, or Holy Week, is celebrated starting on Palm Sunday and leading up to Easter Sunday. The Death and Resurrection of Christ are commemorated with processions throughout the country and the preparation of 12 different dishes, one for each of the 12 apostles.

Likely the most famous of the Easter celebrations is held in Ayacucho, about 16 hours north of Cusco by car. The locals are highly devout, and create especially colorful parades that draw huge crowds.

’El Señor de los Temblores’, or the Lord of the Earthquakes, is the patron saint of Cusco and the center of the Holy Week celebration. The event dates back to 1650, to a story of a statue of Christ (or a canvas, depending on the telling) that was held up during an earthquake, stopping the tremors and saving the city. Since then, a statue has been paraded throughout the city and celebrated, marking the highlight of the Semana Santa celebrations.

While not native to Peru, this festival is one of Peru’s most important. Celebrated in cities and towns across the country, each with its own unique take on the festival, the the Fiesta de las Cruces, or the Festival of the Crosses, is filled with music, dancing, and in some parts of the country, bullfighting.

Originally intended by the Spaniards as a celebration to replace the Incan customary event in May of thanking mother earth for a rich harvest, the Christian counterpart of decorating and parading crosses through town became a blend of the two cultures.

Today, the large wooden crosses are decorated with spectacular flower displays and traditional fabrics, and carried to neighboring churches. Folk music and traditional dancing, including danzantes de tijeras or scissors dancers, can be seen throughout the country.

The ancient Inca Festival of the Sun, also known as Inti Raymi, is one of the most traditional Peruvian festivals, and one of the few that is untouched by Catholic tradition. Held every year on June 24th, the festival is in celebration of the Winter Solstice.

While it was banned by the Spanish and the Catholic Church after 1535, a modern incarnation of the event emerged in 1944, from the few historical records of the festivities that managed to survive. Since then it has continued to grow tremendously, and its historical and cultural significance definitely make it worth witnessing.

The Fiesta de la Virgen del Carmen is held every year in the middle of July in the small town of Paucartambo, about four hours outside of Cusco. The celebration is centered on the the Virgen del Carmen, who is believed to protect the houses and defeat demons that try to climb the rooftops.

The festival combines traditional Andean culture with Catholicism, and is considered one of the biggest and wildest parties in Peru, drawing spectators from all over the country. It is so popular that many visitors end up camping to witness the events, as there just aren’t enough hotel rooms in town to accommodate the crowds.

The event showcases Peruvian history, depicted in the festival's songs, costumes, and dance. And images such as black-masked dancers (depicting African slaves imported to work the silver mines during the colonial era) and mock-battles between characters representing the Qollasuyo and Antisuyo in the time of the Incas make the event a must-see for photographers and partiers alike.

The first native-born american saint to be canonized by the Catholic Church was Santa Rosa de Lima, and therefore she’s a pretty important figure to the Peruvians. While there are world-wide celebrations in her name, the celebration in her homeland of Peru is especially grand, and the one in Lima, at Cathedral Basilica of Lima, where Saint Rose’s remains are currently kept, being the largest.

Processions are held throughout the town, and a popular tradition among the locals is to throw cards with wishes written on them into the well outside the Shrine of Saint Rose of Lima. At the end of the day, the city celebrates with a fireworks show.

Whether you agree that Peru is the “gastronomic pearl of the world” as it’s sometimes known, the country’s chefs are certainly some of the most well-respected in the world, and Peru continues to churn out some of South America’s most impressive cuisine. In September this culinary prowess is celebrated in Lima, at the Mistura Culinary Festival, where chefs from across the country show off outstanding examples of Peru’s traditional cuisine, and the country’s multicultural lineage, with European, African and Asian influences.

Well over a half a million visitors partake every year in the festivities, and over 200 restaurants and bars as well, over the course of ten days. While the dates haven’t been set yet, we’re keeping tabs.. Check back for more updates as they unfold.

As the story goes, an earthquake in the 17th century rumbled through Lima, devastating the town. When the chaos cleared, it was discovered that the only thing left undamaged was a small adobe wall with an image of a standing Jesus Christ. Considered a miracle, the image became the centerpiece of a religious celebration that today is one of the largest Catholic events in Peru and one of the longest processions of any religious gathering in the world.

While one of the more solemn events on the Peruvian event list, its importance to the culture of Peru, and witnessing the pageantry, devotion, and tradition of the celebrants, make it an event not to be missed.

Puno, which also hosts the largest Candelaria celebrations in February, is the hometown for Puno week as well. The week, commencing on November 1st and reaching its height on November 5th, Puno Day, is focused on celebrating Manco Cápac, who, according to story, emerged from Lake Titicaca to found the Inca Empire.

A major procession leads the celebration from the shores of the lake to the town stadium, and dances, music, and a huge amount of revelry surround the city, where the celebrations can get pretty wild. If you’re looking for a good party, this is the one.

For those of us who love finding those special gifts, Santuranticuy, held in the city of Cusco each year on Christmas Eve, cannot be beat. Essentially a massive outdoor marketplace, it’s the home of hundreds of artisans who travel from all over Peru to showcase their workmanship, bringing dolls, sculptures, and figurines in wood, pottery and stone, used to decorate nativity scenes. While things like Christmas trees are getting more popular in Peru, Nativity scenes are still the centerpiece of celebrations, and gifts are placed near it, more often than under trees. So decorating the scene is an important part of the pre-holiday celebrations.

If you want to take part in some of the religious events, the most important Christmas celebration is the holy Rooster Mass, which starts at 10pm in all churches around the country, as well as in Cusco.

And while you’re there, you should take some time to indulge in traditional Peruvian dishes; tamales, wrapped in banana leaves, with corn dough and meat or vegetables, applesauce, sweet bread called paneton and hot chocolate will be seen in food vendor booths and in homes.